The Story of Architecture and the First Civilizations

For over 7,000 years from early Neolithic times the hub of the world was an area of the Middle East shaped liked an inkblot.  From 7000 BC hunters and food gatherers formed villages on the hill fringes of Anatolia and the Zagros Mountains, and the Levant.

Although Jericho is the oldest town in the world, it was in the plains of Mesopotamia that the first urban literate culture developed.  Irrigation was used to regulate the erratic spring floods of the Tigris and Euprates rivers, and the canals served also as trade routes, bringing wood, metals, etc.

DISCLAIMER:  All text from this blog entry are taken from the book The Story of Architecture by Patrick Nuttgens.
MESOPOTAMIA AND ELAM

The ziggurat was a piece in a temple complex that served as an administrative center for the city, and which was a shrine of the moon god Nanna, the patron deity of Ur.

ASSYRIA AND THE NEW BABYLON

Both cities had temples, grand palaces and fortified walls with crenellated towers.  The layout of Ashurnasirpal II's New Palace in Nimrud, with ziggurat complex, throne room, administrative block and residential wing, all enclosing large public court, became standard.  The postcard below shows details of the entrance leading to Ashurnasserpal's Palace. 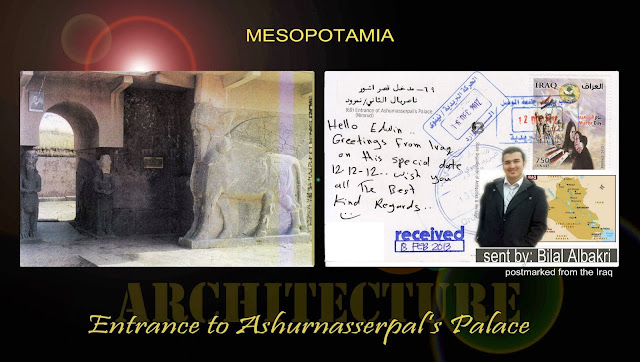 b.  Palace of Sargon
http://commons.wikimedia.org/wiki/File:Sargon_II_palace_in_Dur-Sharrukin.png

c.  The Hanging Gardens of Babylon


The Ishtar Gate was the eight gate to the inner city of Babylon.  It was constructed in abut 575 B.C. by order of King Nebuchadnezzar II on the north side of the city.  Through the gate ran the Processional Way, which was lined with walls covered in lions on glazed bricks. 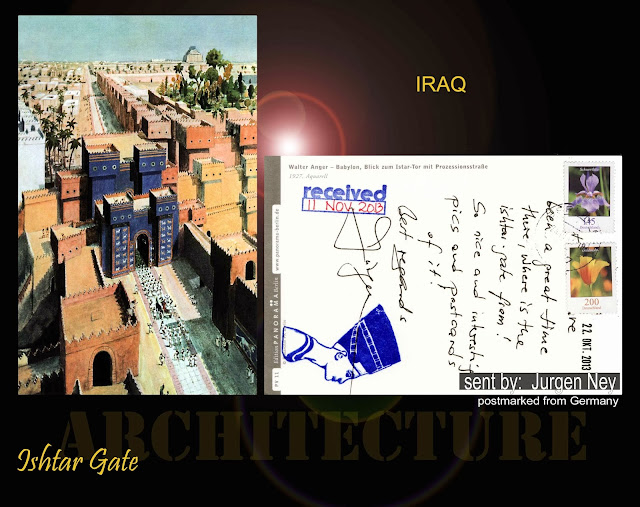 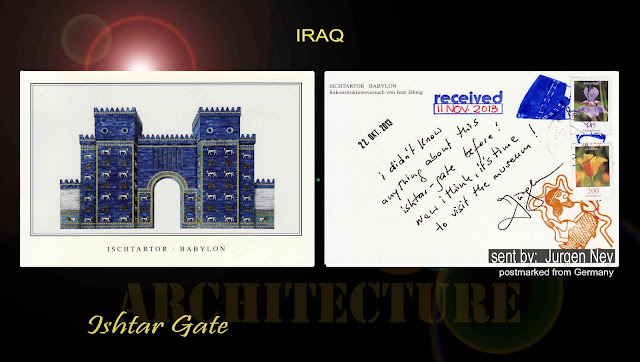 Dedicated to the Babylonian goddess Ishtar, the gate was constructed of Lapis lazuli with alternating rows of bas-relief mushussu (dragons / see below) and aurochs. 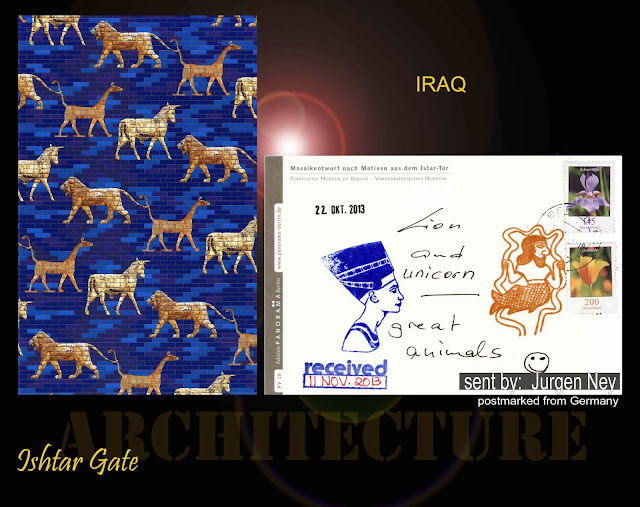 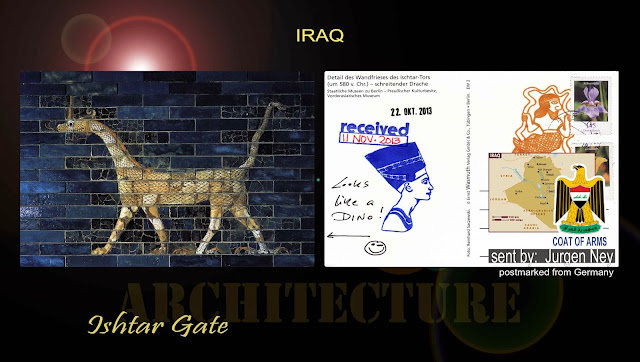 A reconstruction of the Ishtar Gate and Processional Way was built at the Pergamon Museum in Berlin (shown below)  out of material excavated by Robert Koldewey and finished in the 1930s. 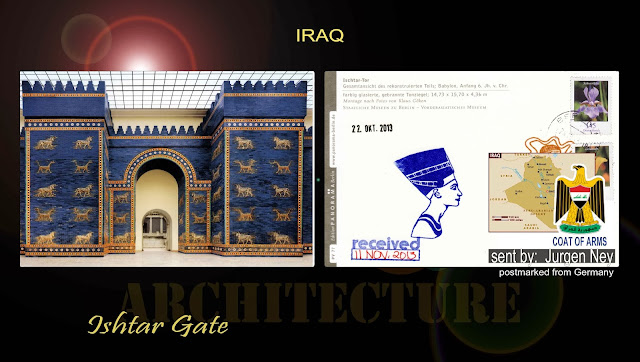 Part of the gate and lions from the Processional Way are in various other museums around the world.  Only three museums acquired dragons, while lions (shown below) went to several museums. 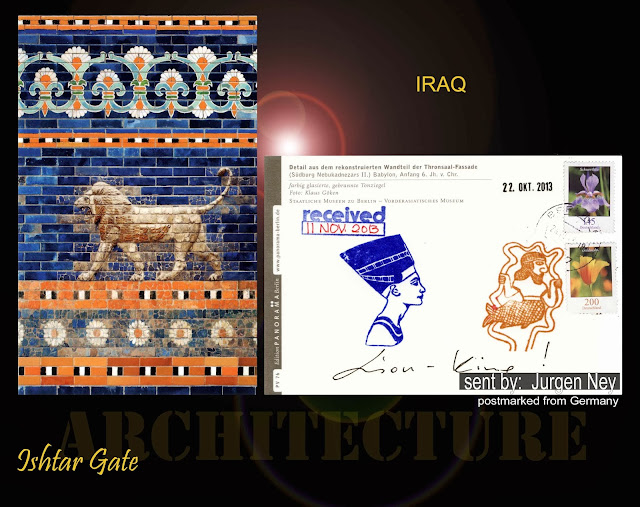 THE PERSIAN AND SASSANIAN EMPIRES

The Palace of Persepolis in Iran was built mainly under Xerxes I.  Shown here on the postcard is the terrace approached by a double staircase, leading to a gatehouse faced with polychrome bricks. 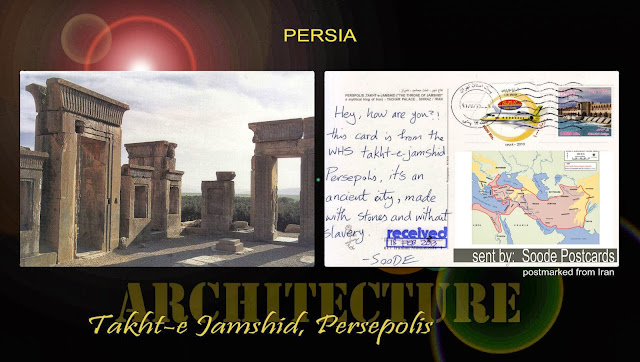 a.  Palace at Ctesiphon in Iraq


Ambitious and celebrated architectural achievement of the dynasty is the vast palace at Ctesiphon, built by Khosrow, a part of which is still standing.  It is known as the Taq Kisra and is notable for its barrel vault in baked brick, a typically Sasanian architectonic device.

The buildings on top of the citadel stretch over a roughly oval area of 430 by 340 meters occupying 102,000 square meters.  It has been claimed that the site is the oldest continously inhabited town in the world.  During the Sassanian period, Erbil was an important center of Christianity and the Assyrians.  After the Mongols captured the citadel in 1258, Erbil's importance began to decline. - wikipedia 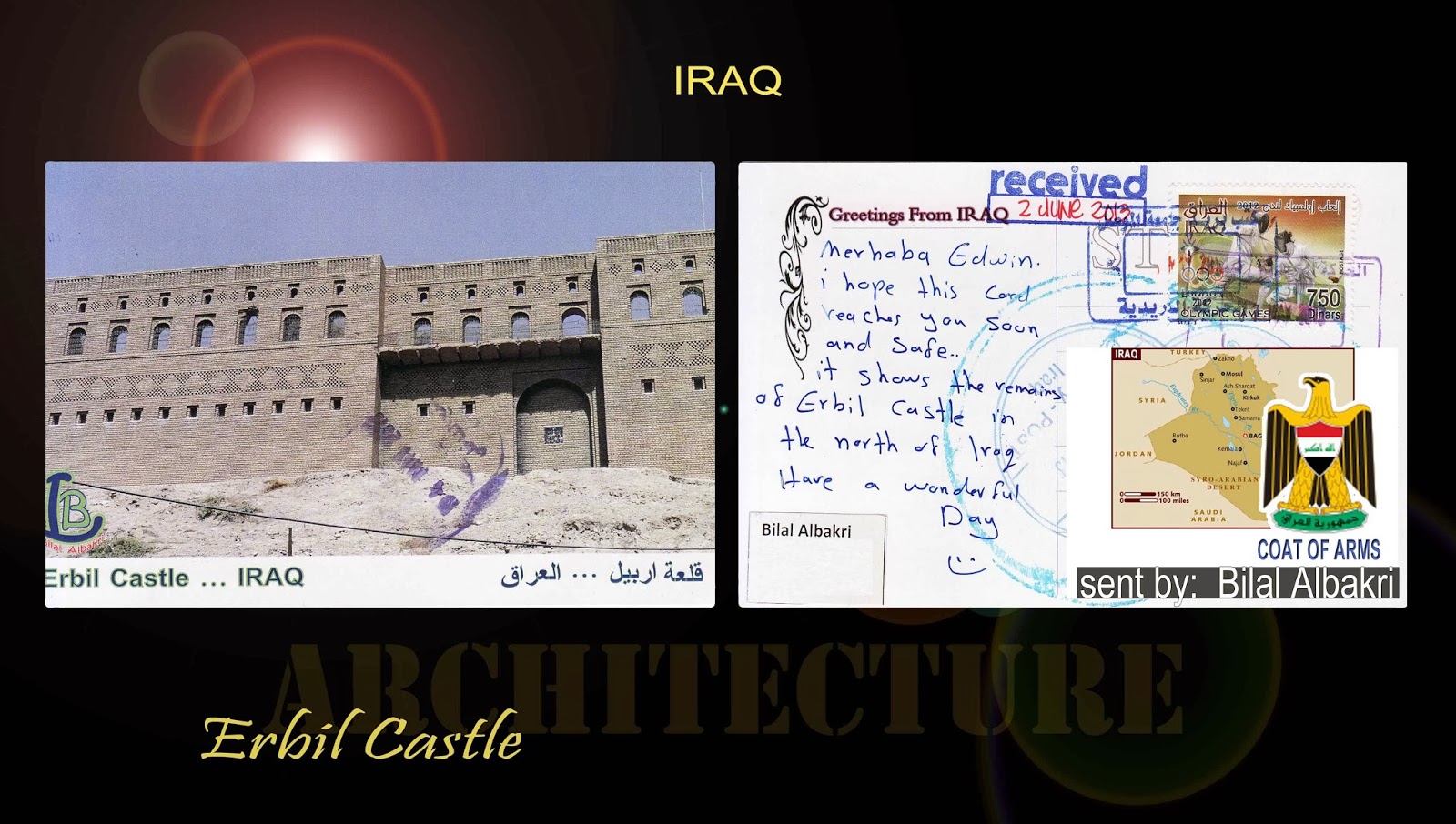