Combining features of ancient Roman and Byzantine buildings and other local traditions, Romanesque architecture is known by its massive quality, thick walls, round arches, sturdy pillars, groin vaults, large towers and decorative arcading. Each building has clearly defined forms, frequently of very regular, symmetrical plan; the overall appearance is one of simplicity when compared with the Gothic buildings that were to follow. The style can be identified right across Europe, despite regional characteristics and different materials.

Many castles were built during this period, but they are greatly outnumbered by churches. The most significant are the great abbey churches, many of which are still standing, more or less complete and frequently in use. The enormous quantity of churches built in the Romanesque period was succeeded by the still busier period of Gothic architecture, which partly or entirely rebuilt most Romanesque churches in prosperous areas like England and Portugal. The largest groups of Romanesque survivors are in areas that were less prosperous in subsequent periods, including parts of southern France, and northern Spain and rural Italy. Survival of unfortified Romanesque secular houses and palaces, and the domestic quarters of monasteries are far rarer, but these used and adapted the features found in church buildings, on a domestic scale. 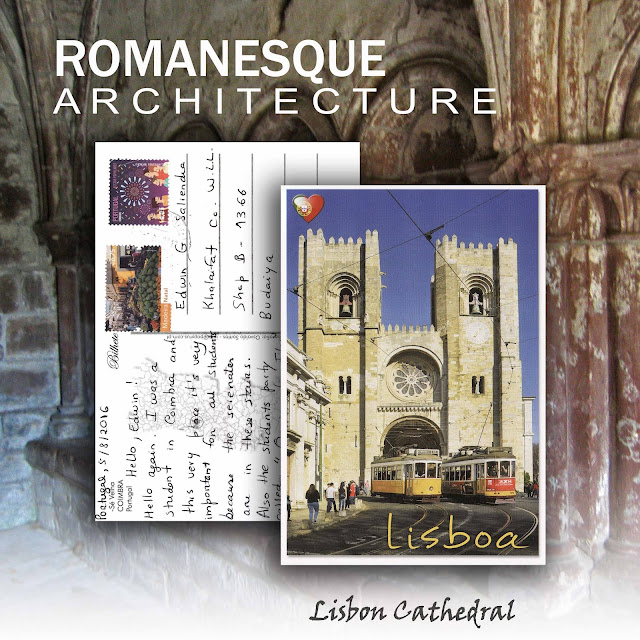 LISBON CATHEDRAL. From its first building period (1147 until the first decades of the 13th century), Lisbon cathedral has preserved the West facade with a rose window (rebuilt from fragments in the 20th century), the main portal, the North lateral portal and the nave of the cathedral. The portals have interesting sculptured capitals with Romanesque motifs. 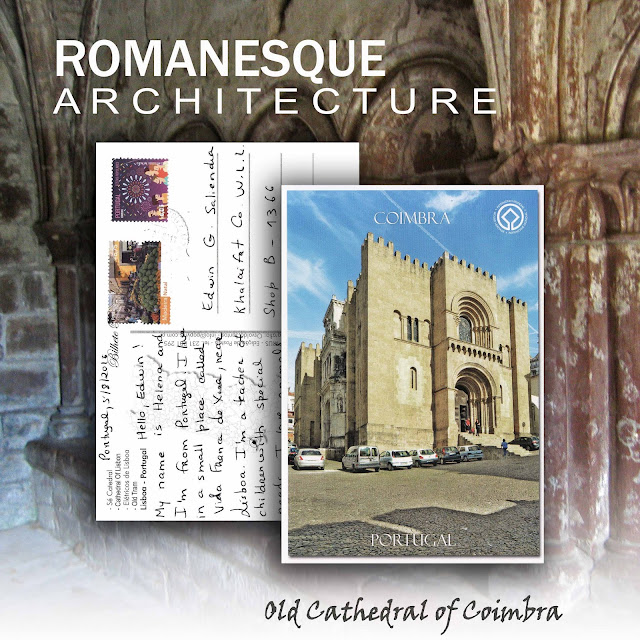 OLD CATHEDRAL OF COIMBRA. Coimbra Cathedral is the only one of the Portuguese Romanesque catrhedrals from the Reconquista times to have survived relatively intact up to the present. The cathedrals of Porto, Braga, Lisbon and others have been extensively remodelled later. 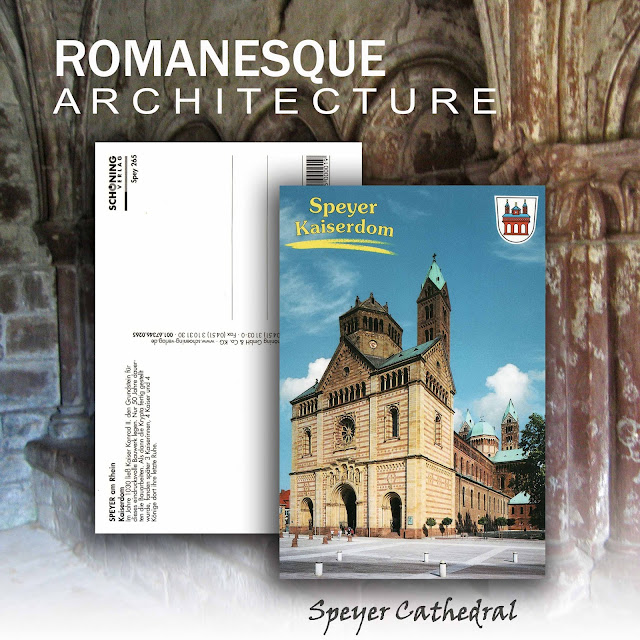 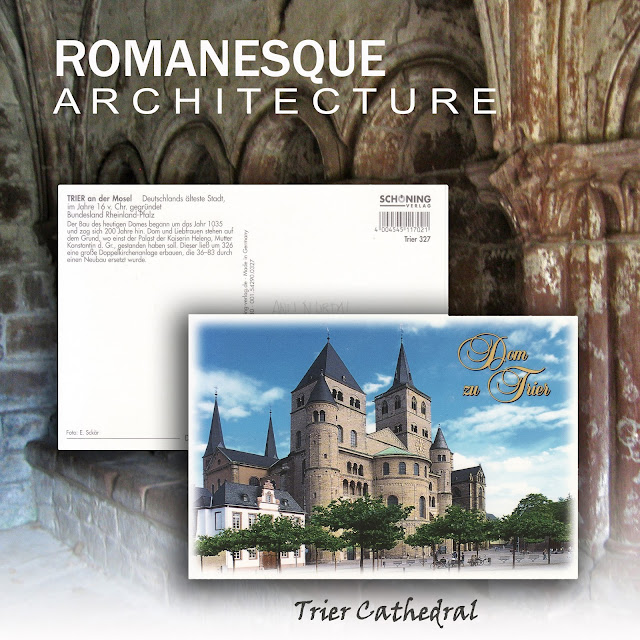 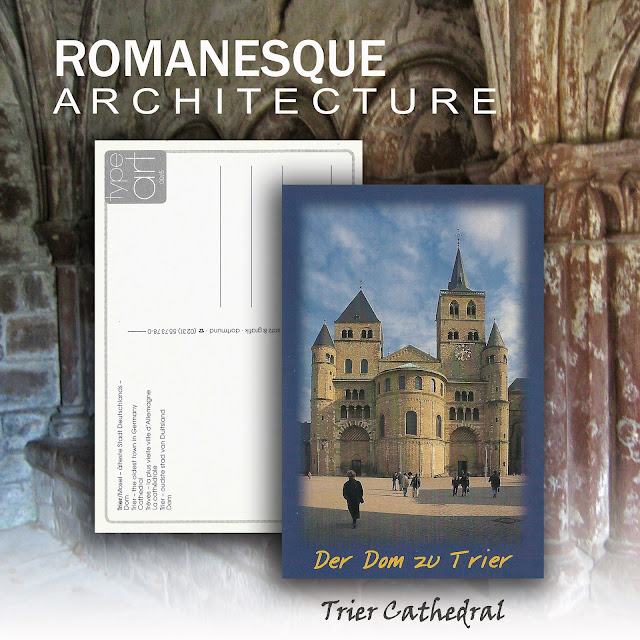 TRIER CATHEDRAL. The West front in five symmetrical sections remains typical of Romanesque architecture under the Salian emperors. The West end choir, with its apsidal-cylinder expressed on the exterior facade, was completed in 1196. The interior is of three Romanesque naves with Gothic vaulting, and a Baroque chapel for the relic of the Seamless robe of Jesus, recovered from the interior of the high altar in 1512, complete the interior.

The Latin inscription above the clock on the tower reads "NESCITIS QVA HORA DOMINVS VENIET" ("You do not know what time the Lord is coming.") 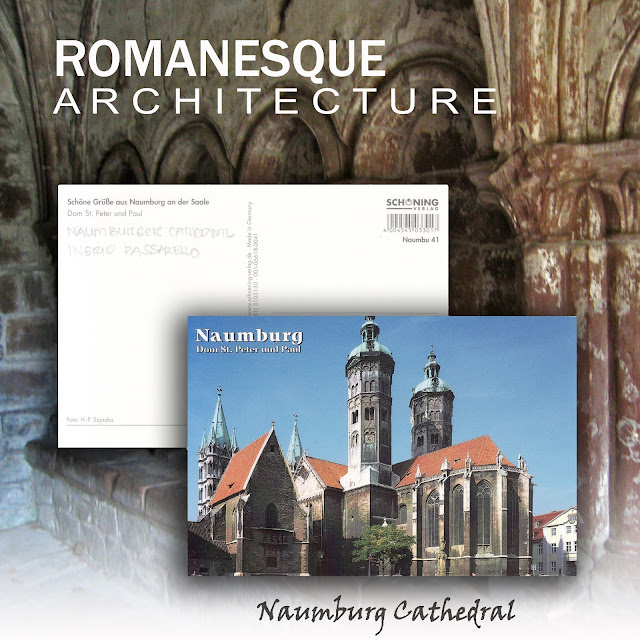 NAUMBURG CATHEDRAL. The church building, most of which dates back to the 13th century, is a renowned landmark of the German late Romanesque. With the Reformation, Naumburg and its cathedral became Protestant. Naumburg Cathedral remains a Protestant parish church to this day. 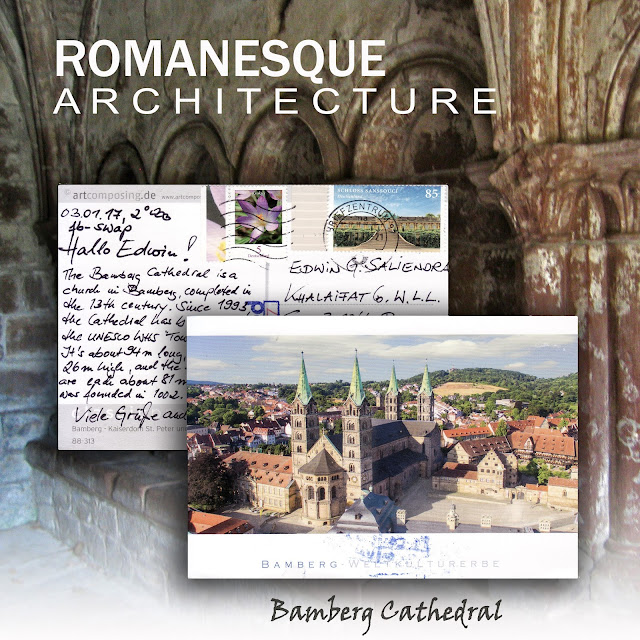 BAMBERG CATHEDRAL is a church in Bamberg, Germany, completed in the 13th century. The cathedral is under the administration of the Roman Catholic Church and is the seat of the Archbishop of Bamberg. Since 1993, the cathedral has been part of the UNESCO World Heritage Site "Town of Bamberg".
It was founded in 1002 by King (and later Emperor) Heinrich II (Henry II) and consecrated in 1012. After the first two cathedrals burned down in the 11th and 12th centuries, the current structure, a late Romanesque building with four large towers, was built in the 13th century. 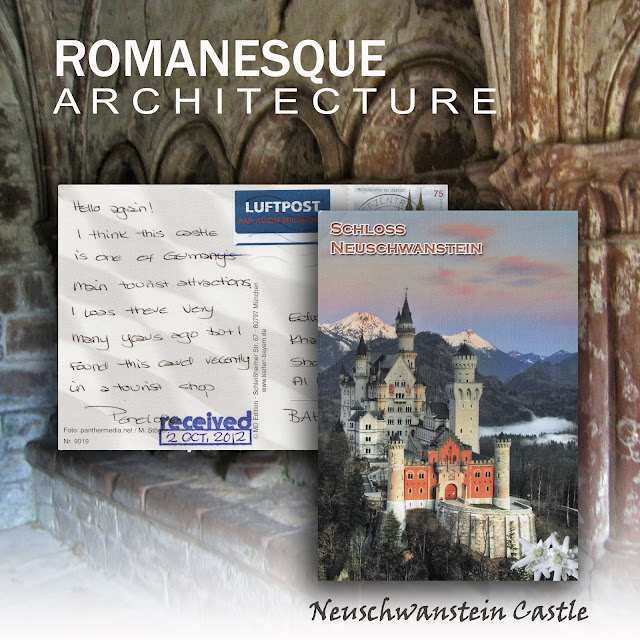 NEUSCHWANSTEIN CASTLE.  The basic style was originally planned to be neo-Gothic but the palace was primarily built in Romanesque style in the end. The palace can be regarded as typical for nineteenth-century architecture. The shapes of Romanesque (simple geometric figures such as cuboids and semicircular arches), Gothic (upward-pointing lines, slim towers, delicate embellishments) and Byzantine architecture and art (the Throne Hall décor) were mingled in an eclectic fashion and supplemented with 19th-century technical achievements. 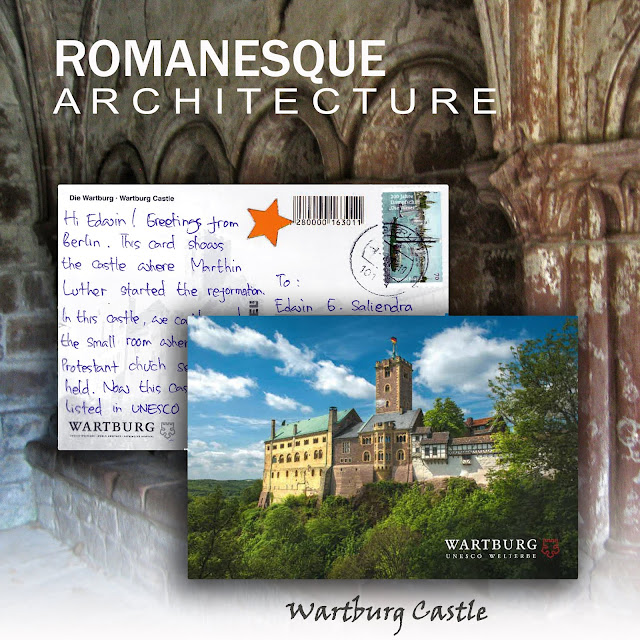 WARTBURG CASTLE. It is a castle originally built in the Middle Ages. It is situated on a precipice of 410 meters (1,350 ft) to the southwest of and overlooking the town of Eisenach, in the state of Thuringia, Germany. In 1999, UNESCO added Wartburg Castle to the World Heritage List. It was the home of St. Elisabeth of Hungary, the place where Martin Luther translated the New Testament of the Bible into German, the site of the Wartburg festival of 1817 and the supposed setting for the possibly legendary Sängerkrieg. It was an important inspiration for Ludwig II when he decided to build Neuschwanstein Castle. Wartburg is the most-visited tourist attraction in Thuringia after Weimar. Although the castle today still contains substantial original structures from the 12th through 15th centuries, much of the interior dates back only to the 19th century. 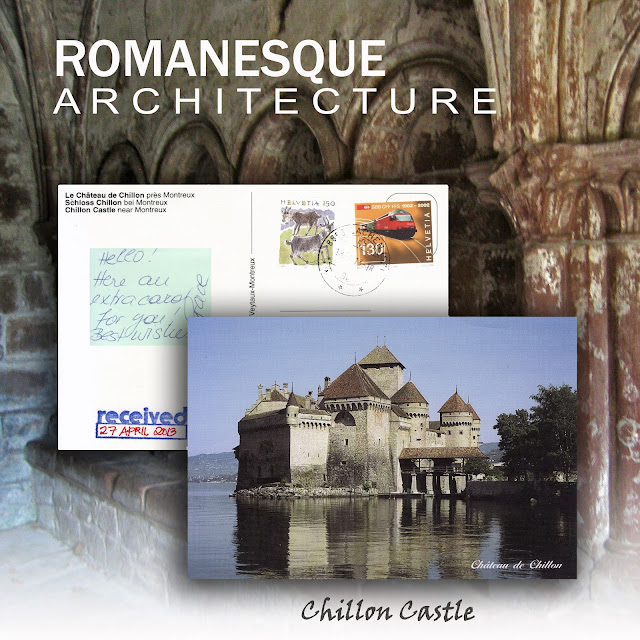 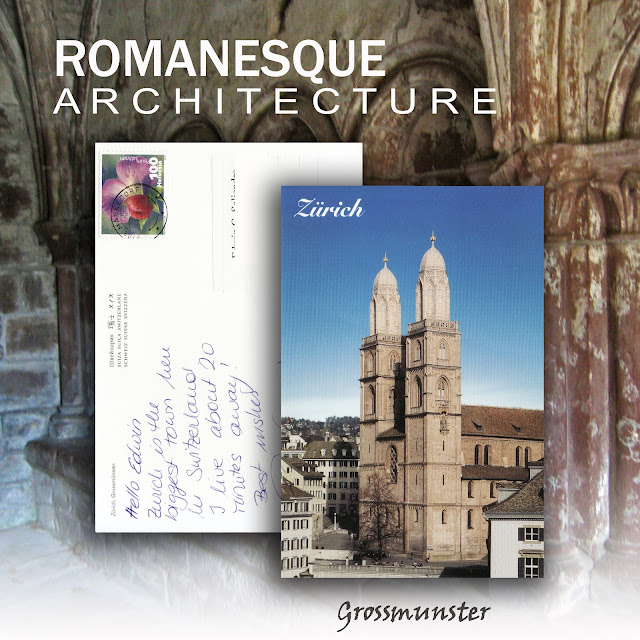 GROSSMUNSTER CHURCH.  The twin towers of the Grossmunster are regarded as perhaps the most recognized landmark in Zurich. Architecturally, the church is considered Romanesque in style and thus a part of the first pan-European architectural trend since imperial Roman architecture. In keeping with the Romanesque architectural style, Grossmunster offers a great carved portal featuring medieval columns with grotesques adorning the capitals. A Romanesque crypt dates to the 11th and 13th centuries. 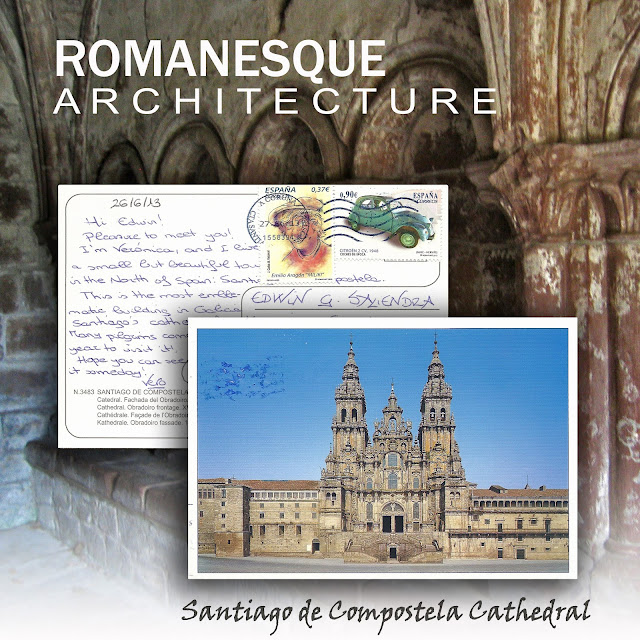 SANTIAGO DE COMPOSTELA CATHEDRAL.  The cathedral has historically been a place of pilgrimage on the Way of St. james since the Early Middle Ages and marks the traditional end of the pilgrimage route. The building is a Romanesque structure, with later Gothic and Baroque additions. 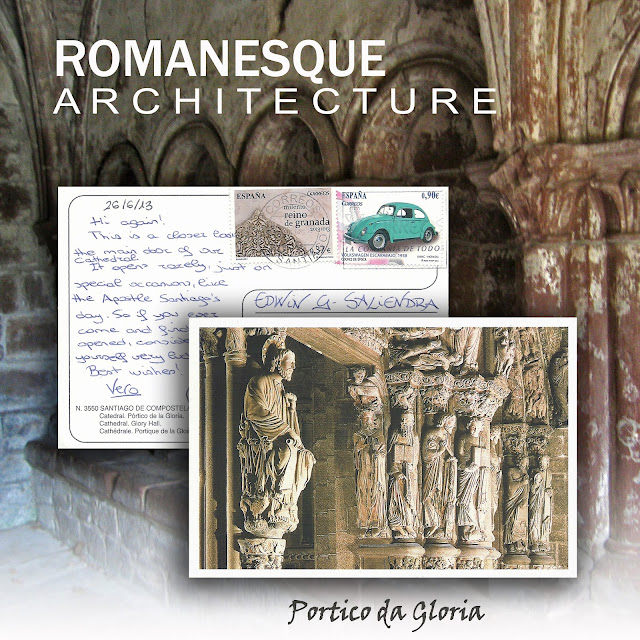 PORTICO DA GLORIA.  The Portico da Gloria ("portico of the glory" in Galician) of the Cathedral of Santiago de Compostela is a Romanesque portico by master Mateo and his workshop commissioned by King Ferdinand II of Leon.

The portico has three round arches that correspond to the three naves of the church, supported by thick piers with pilasters. The central arch, twice as wide as the other two, has a tympanum and is divided by a central column - a mullion - containing a depiction of Saint James. Vertically 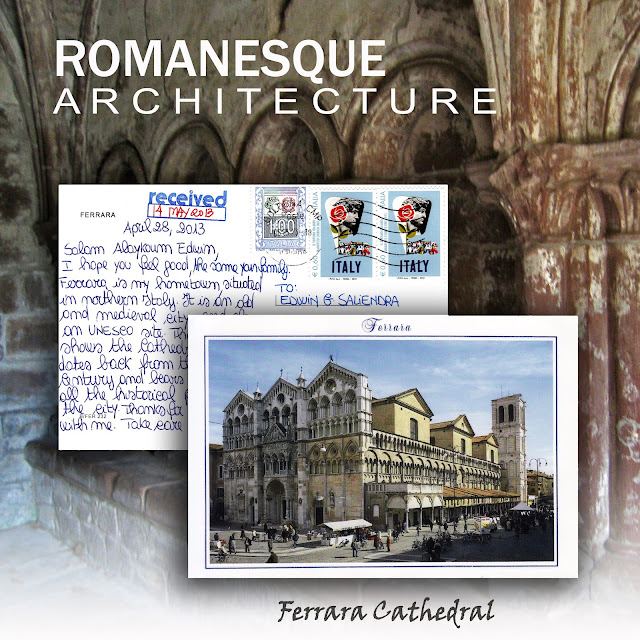 FERRARA CATHEDRAL.  The original Romanesque design is manifest in the facade, which resembles those of Modena and Parma Cathedrals; it is in white marble, with three cusps and a series of loggias, small arcades and rose windows, statues and numerous bas-reliefs. On the right side is a statue of Alberto d'Este, while on the side is a bronze bust of Pope Clement VIII, over an inscription in memory of his capture of the city. 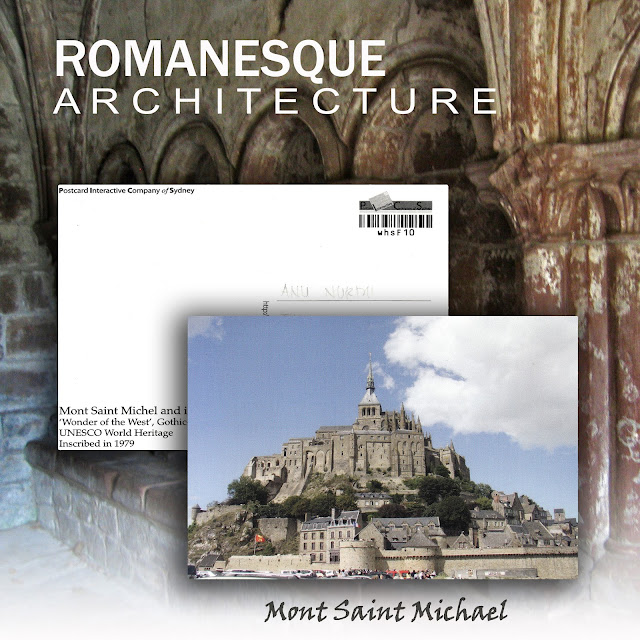 MONT SAINT MICHAEL.  In the 11th century, William of Volpiano, the Italian architect who had built Fecamp Abbey in Normandy, was chosen by Richard II, Duke of Normandy, to be the building contractor. He designed the Romanesque church of the abbey, daringly placing the transept crossing at the top of the mount. Many underground crypts and chapels had to be built to compensate for this weight; these formed the basis for the supportive upward structure that can be seen today. Today Mont Saint-Michel is seen as a building of Romanesque architecture. 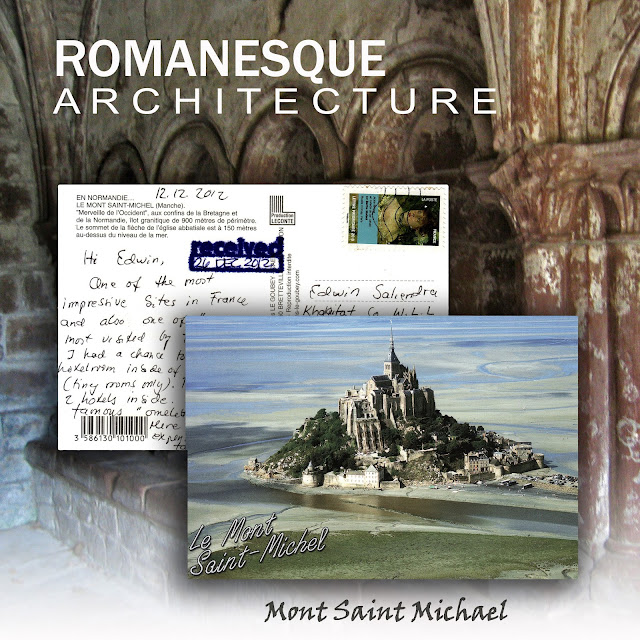 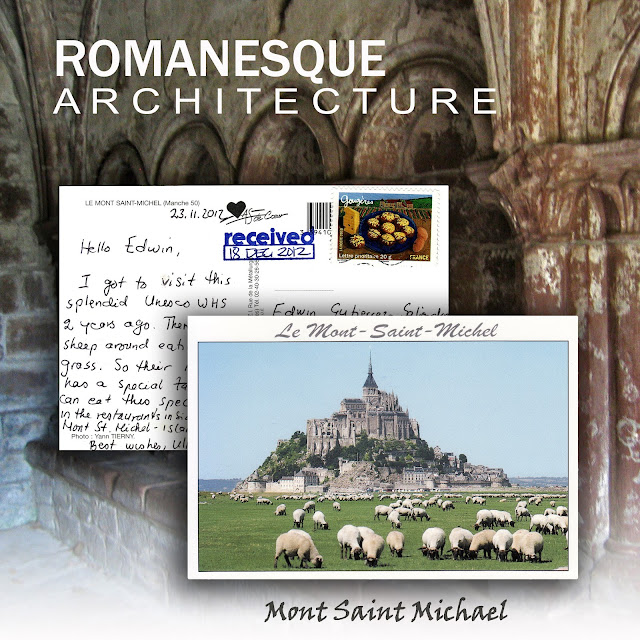 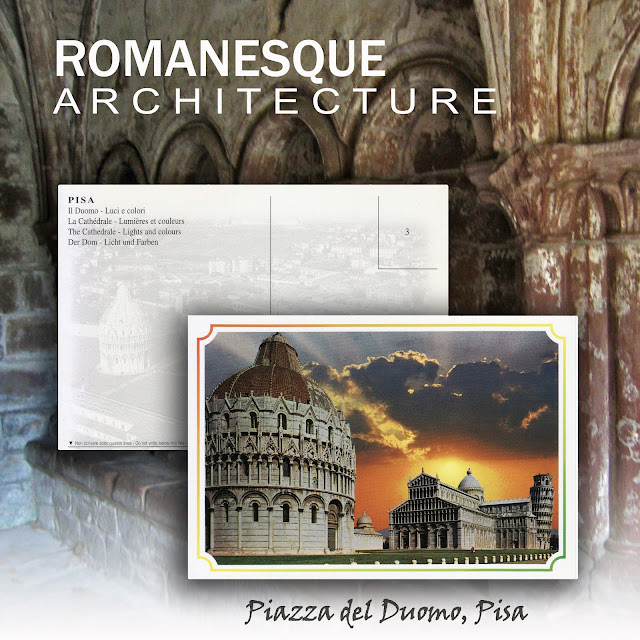 THE CATHEDRAL.  The heart of the Piazza del Duomo is the Duomo, the medieval cathedral of the Archdiocese of Pisa, dedicated to Santa Maria Assunta (St. Mary of the Asumption). Its construction began in 1064 by the architect Buscheto. It set the model for the distinctive Pisan Romanesque style of architecture.

THE BAPTISTERY.  The Baptistery, dedicated to St. John the Baptist, stands opposite the west end of the Duomo. The round Romanesque building was begun in the mid 12th century. It was built in Romanesque style by an architect known as Diotisalvi ("God Save You"), who worked also in the church of the Holy Sepulchre in the city. It is the largest baptistery in Italy, with a circumference measuring 107.25 m. Taking into account the statue of St. John the Baptist (attributed to Turino di Sano) atop the dome, it is even a few centimeters.

THE CAMPANILE.  The campanille (bell tower), commonly known as the Leaning Tower of Pisa, is located behind the cathedral. The last of the three major buildings on the piazza to be built, construction of the bell tower began in 1173 and took place in three stages over the course of 177 years, with the bell-chamber only added in 1372. Five years after construction began, when the building had reached the third floor level,the weak subsoil and poor foundation led to the building sinking on its south side. The building was left for a century, which allowed the subsoil to stabilise itself and prevented the building from collapsing. In 12272, to adjust the lean of the building, when construction resumed, the upper floors were built with one side taller than the other. The seventh and final floor was added in 1319. By the time the building was completed, the lean was approximately 1 degree, or 80 cm (2.5 feet) from vertical. At its greatest, measured prior to 1990, the lean measured approximately 5.5 degrees. As of 2010, the lean was reduced to approximately 4 degrees. 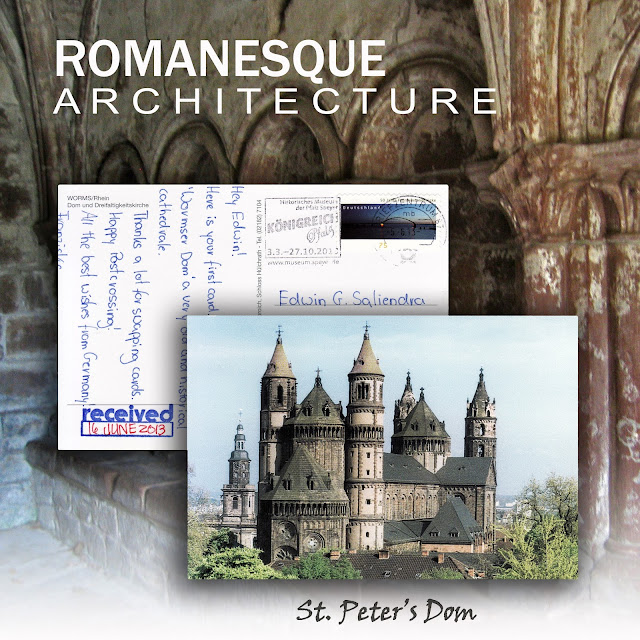 ST. PETER'S DOM.  (German: Wormser Dom) is a church in Worms, southern German. The Dom is located on tyh ehighest point of the inner city of Worms and is the most important building of the Romanesque style in Worms.

The Dom is a pier-basilica with two choirs and a transept. A central tower is located on the crossing, another over the western choir. Both choirs are flanked by two round staircase towers. The nave is vaulted in various ways: the central aisle has rib vaultging, while the side aisles have groin vaults. The apse of the west choir takes the form of an octagon and is decorated with various rosette windows. 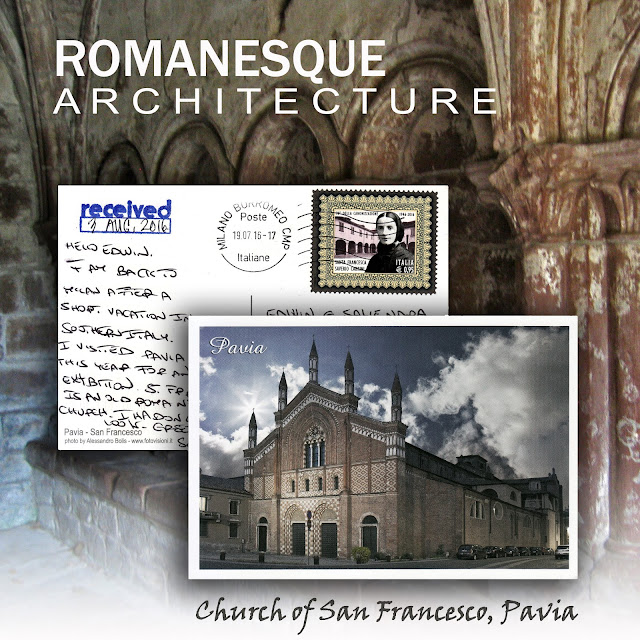 CHURCH OF SAN FRANCESCO, PAVIA.  The structure of the church has three naves. Inside stands a back Romanesque, characterized by a covering to trusses and round arches and a front gothic with vaulted white and red ribbed of pointed arches. The design of the chapel is Giovanni Ruggeri. 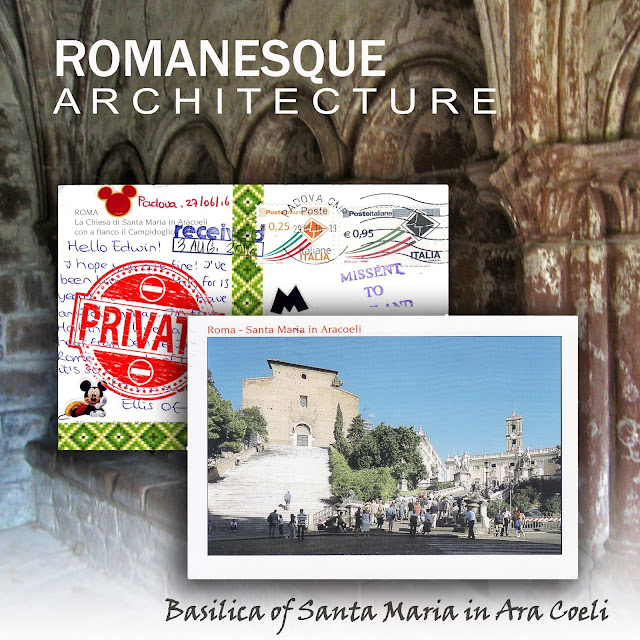 CHURCH OF SANTA MARIA IN ARA COELI.  The church is basilical in plan. It has a nave of twelve bays with side aisles, followed by a transept and then by the sanctuary with choir. The three pitched and tiled roofs of central nave, transept and sanctuary form a latin cross. 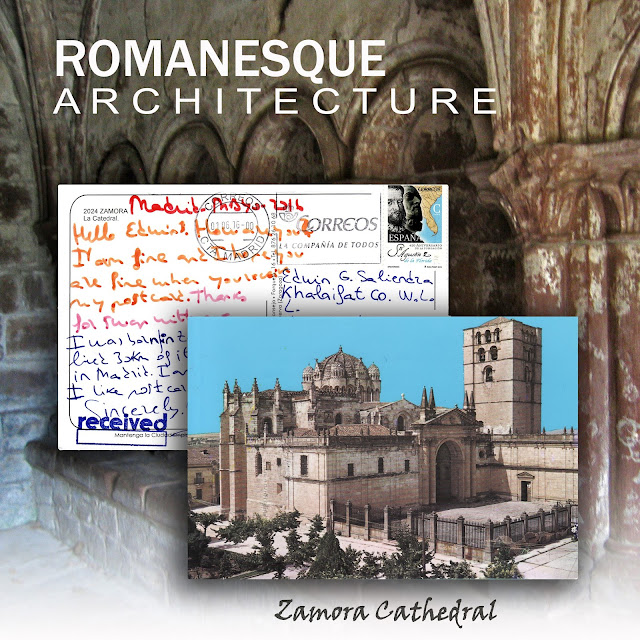 ZAMORA CATHEDRAL.  The building, in Romanesque style, is on the Latin cross plan; it has a nave a two ailes, a short transept and three semicircular apses. The latter were replaced by Gothic ones in the 15th century. The transept is covered by barrel vault, the aisles by groin vault and the nave by cross vault in late-Romanesque or Proto-Gothic style. The bell tower, with a height of 45 m, was built in the 13th century in Romanesque style. 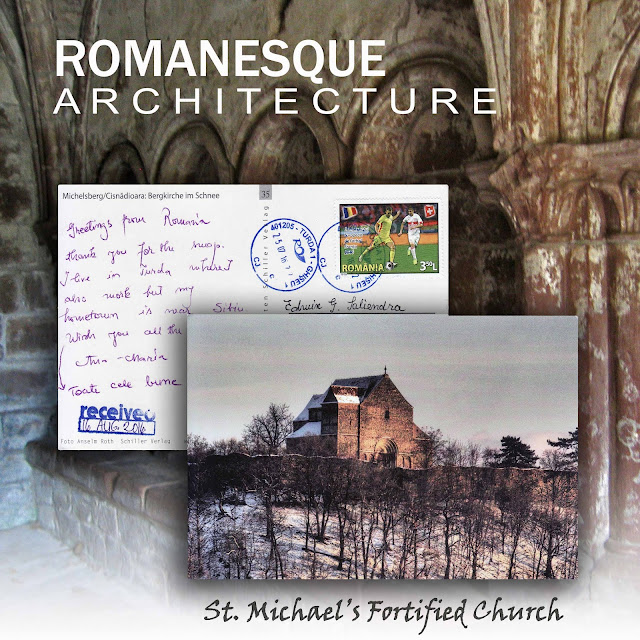 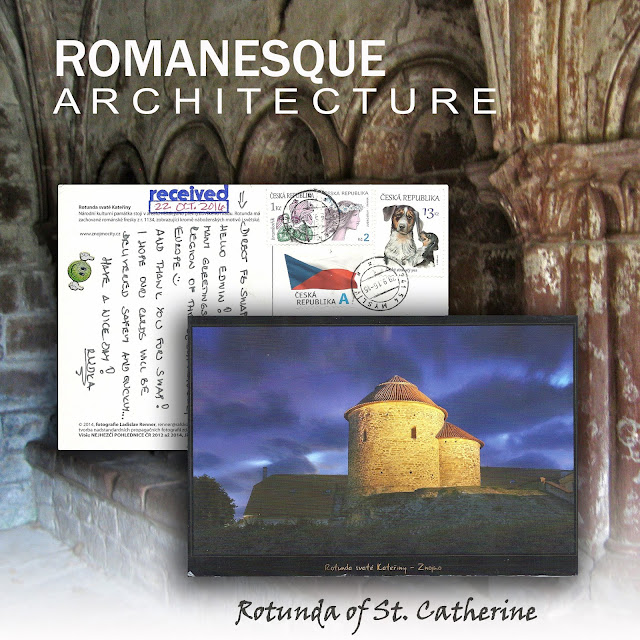 ROTUNDA OF ST. CATHERONE. known as the Znojmo Rotunda, is a Romanesque Rotunda located in Znojmo, Czech Republic. It is the town's most valuable monument and features one of the oldest fresco compositions in the Czech lands. The building was originally a castle chapel, dedicated to Virgin Mary, built in the mid-11th century.