The Story of Architecture by the Romans

Roman building technology was the most advanced of its time.  Though highly original in many aspects, it appropriated some techniques from the Etruscans, who were probably the first Europeans to make wide use of the true radiating arch, built-up of wedge-shaped blocks known as voussoirs.

The Romans continued to build along Etruscan lines until well into the Republic, but then began to assimilate Greek sources.  In the distinctive Roman style that emerged prior to the Empire, the aesthetic functionalism of the Greeks gave way to a largely decorative treatment of the Classical Orders.

Roman ingenuity was applied both to existing building types such as temples and theatres and to new ones such as basilicas (legal and commercial centres), public baths (thermae) and amphitheatres.  The result was an architecture unprecedented in the variety of functions it served.  Roads, aqueducts and bridges - unadorned feats of engineering - are in some ways more impressive than public buildings.

Etruscan methods of building arches city walls and drainage channels were taken over by the Romans.  It is likely that the atrium type of house was an Etruscan invention, as was the Tuscan Order, an unfluted version of Doric.

The Temple of Juno Sospita, Lanuvium was in the characteristic style , which influenced Roman temples.

The architecture of Imperial Rome reached heights of variety and elaboration never before attained. Although Greek and Greek-trained architects were often employed, their traditional ideas were transformed by engineering skill and by a bldly original vision.

1.  The Imperial Forum.  The forum, like the Greek agora, was the social and political hub of a city, serving as meeting-place and market.  Usually surrounded by collonades and both sacred and secular buildings. 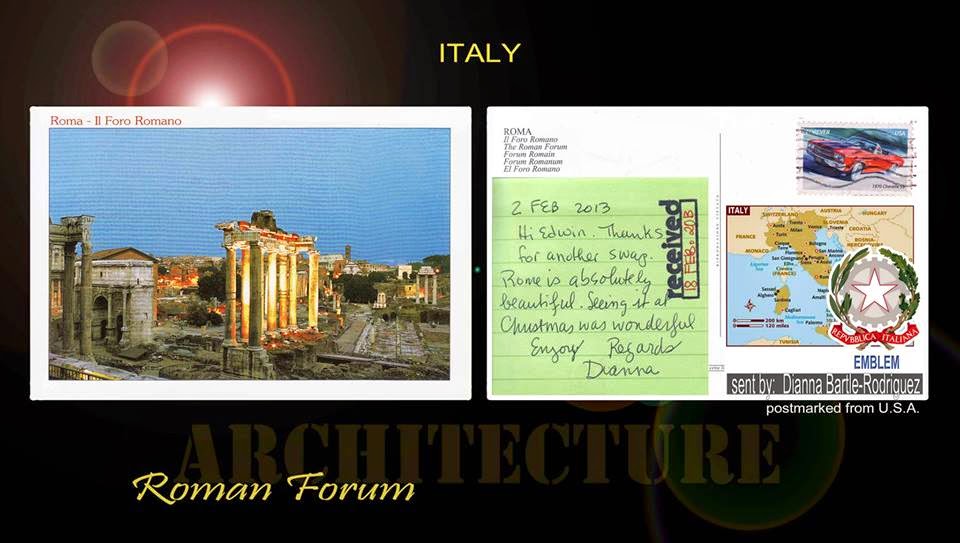 The first Roman forum, the Forum Romanum, developed in a valley that had been drained by the Etruscans.

Political facilities (e.g. the senate house and orators' platform) were at wider West end, while religious activities, based on the sacred hearth tended by the Vestal Virgins took place to East.  Shops lined the area.  As political functions lost their vitality, architectural embellishment took over. 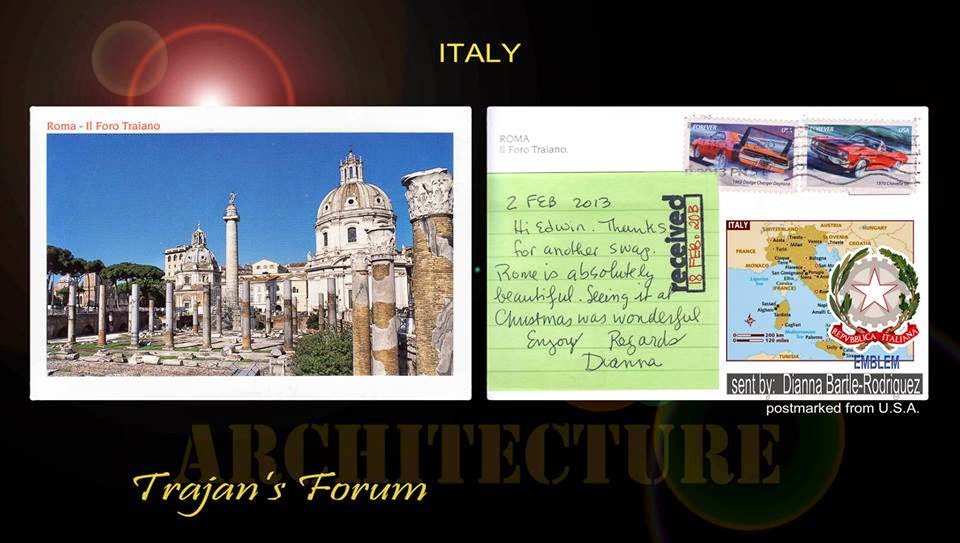 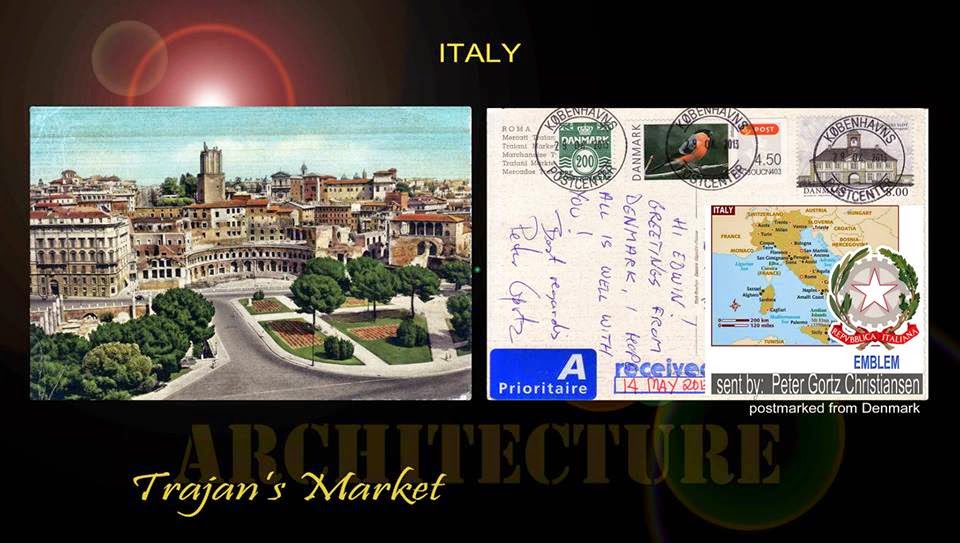 2.  Temples.  Most Roman temples had an external altar and a chamber (cella) housing statuary  and treasures.  The rectangular type, more common than the circular, stood on an Etruscan-inspired podium with a frontal staircase between side walls.  Outer columns of a deep prostyle porch were often continued along sides and rear of cella by attached half columns - a style known as pseudopederipteral.  A temple was often designed to be seen from a forum: the emphasis was on the facade.

The Temple of Mars Ultor, in Forum of Augustus, has apse in cella, a feature later to be used in early Christian churches.

To south east of Forum Romanum stood the peripteral Temple of Castor and Pollux, of which three Corinthian columns survive with fine entablature (see no. 17 from postcard below)

Hadrian's Temple of Venus and Rome, also peripteral, had two cellas back to back with continous apses (still standing).

The pseudoperipteral Temple of Antoninus and Faustina (San Lorenzo in Miranda) became a church in 1602.

The Temple of Portunus, near Temple of Fortuna Virilis, is now Church of S. Maria del Sole.  A circular cella surrounded by 20 marble Corinthian columns stands on platform with steps all round in Greek  mode.

The Temple of Vesta, site of the sacred hearth, was rebuilt by Septimius Severus AD 205. 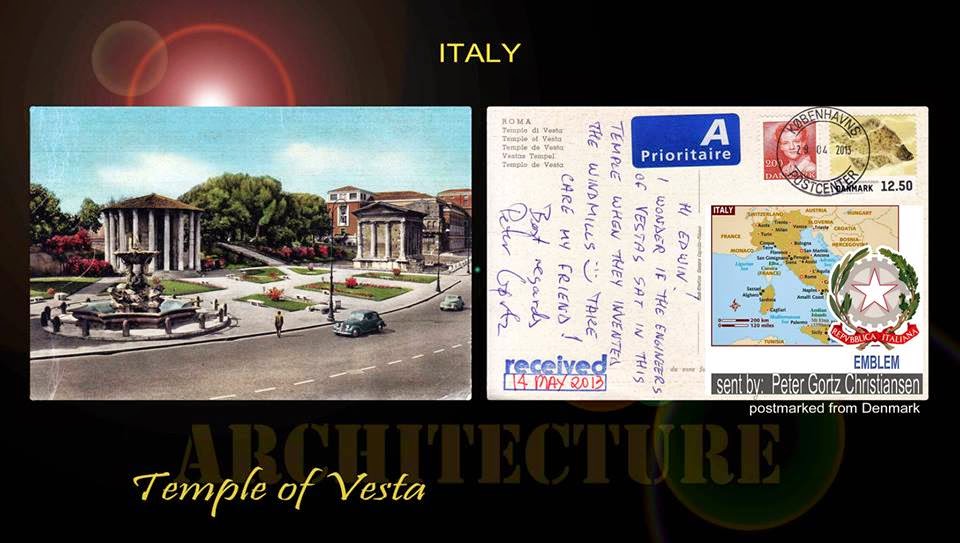 The Pantheon, now Church of S. Maria Rotunda, is the best preserved building of ancient rome.  The circular path (rotunda) was built by Hadrian, to symbolize the cosmos; rather ill-fitting portico incorporates a temple completed by Agrippa circa 25 BC.  Although much of original decoration has gone, the Pantheon's vast scale, geometrical simplicity and well planned interior are still impressive. The dome, saucer-shaped outside, is a perfect hemisphere inside.  At crown is an open round hole (oculus) over 8 meter in diameter, an effective means of lighting. 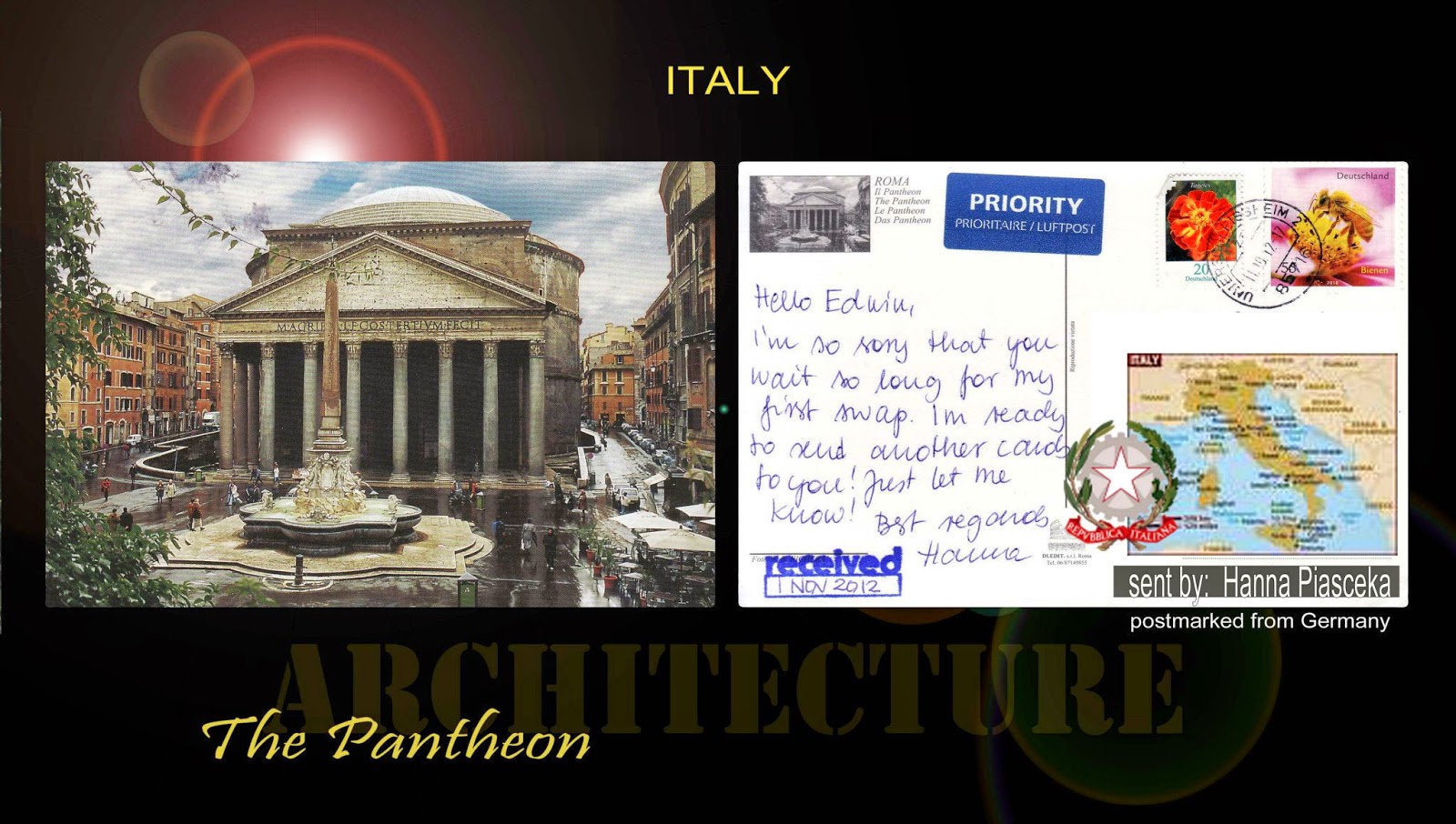 Constructed on Hadrian's orders and completed in AD128, the Pantheon's hemispherical dome is punctured by a 30 ft-wide circular hole known as the 'ocukus'. It provides the interior of the building with its only source of natural light and allows in rain and - on rare occasions - snow.

3.  Basilicas.  Basilicas (halls of justice and commerce) became the model for early Christian churches. The usual plan was rectangular, comprising a "nave" flanked by lower-roofed aisles, sometimes galleried.  Opposite the entrance was usually a semicircular apse for the tribunal.  Roofs, generally wooden, sometimes had a vast span.  Exterir were unornamented.

The Basilica of Maxentius was unusual in being vaulted, a feature inspired by Imperial thermae.  Nave was covered by a three-compartment coffered groin vault, springing from buttress walls that divided each aisle into three barrel-vaulted sections, each surmounted by a clerestory window (see no. 8 from postcard below).

4.  Imperial Thermae.  Thermae, found throughout the Empire, were public baths which served as meeting-places, with facilities for athletics and lectures.  They were generally raised on platform, with heating systems underneath.  Main rooms included the calidarium (hot room), tepidarium (warm room) and frigidarium (containing an unheated pool).  Other rooms were used for dry sweating, dressing and manicure.

The palatial Baths of Caracalla, now a skeleton, stood in the park used for sports, round which were grouped halls for lectures and plays.  The immense groin-vaulted hall had symmetrical wings either side, but main rooms were along an axis at right angles to these.  Plan was devised to avoid congestion:  bathers divided into two flows which merged in final sequence.  Calidarium was domed, frigidarium open-air.  Interior had marble pavements, alabaster and marble columns, and Greek sculptures.

The Baths of Diocletian were similar in design to those of Caracalla.  Room for over 3,000.  Groin vaulting of main hall sprang from granite columns (15m high) with Composite capitals of white marble. Calidarium was rectangular: more usually it was circular or polygonal and domed.  Outer enclosure wall had both rectangular and semicircular exadrae.  Michelangelo converted main hall to a church in 1563, raising floor.  Choir added mid 18th century.  Plentiful Roman details remain (e.g. mosaics).

5.  Amphitheatres, circuses and theatres.  Amphitheatres, found in every important settlement except in the Hellenized eastern provinces, were constructed for the deadly animal and gladiatorial fights which for the Romans passed as entertainment.  Oval in plan, with high tiers of seats round an arena, they posed difficult structural problems, solved with great ingenuity.  Circuses wer an elongated version used for horse and chariot races.

Theatres, less characteritic than amphitheatre, were built on flat ground as well as into hillsides.  They differed from the Greek version in being semicircular (instead of covering two-thirds of a circle) and in having a deeper stage.

The awe-inspiring Colosseum (Flavian Amphitheatre) elliptical in plan, held 48,000 spectators.  The seating tiers rested on converging wedges of masonry with vaulted passageways between them.  Outer wall, carried by 80 piers, has 4 arcaded stories, illustrating typically Roman use of Classical Orders as pure decoration.  Each level has a continuous entablature.  A great number of corridors and stairways, together with encircling double ground-floor passage, made for rapid evacuation. 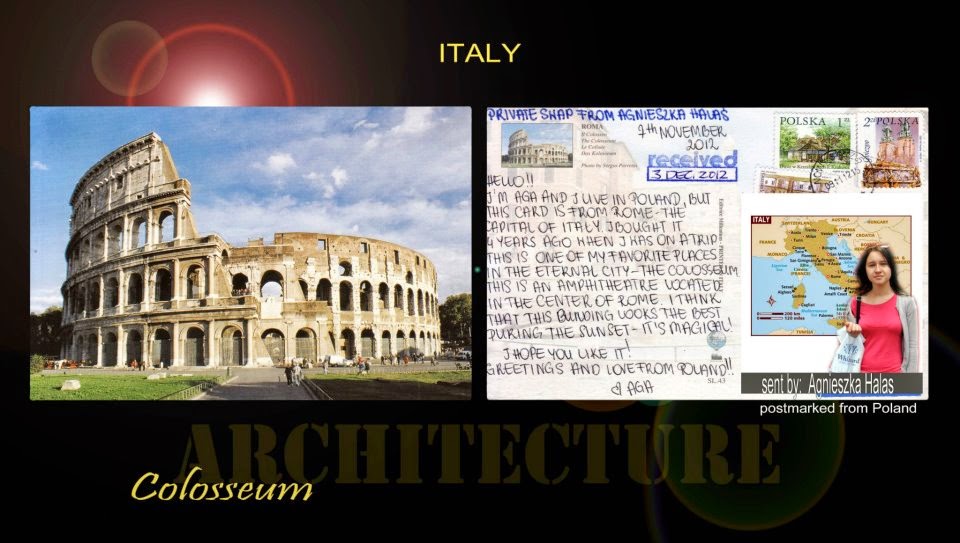 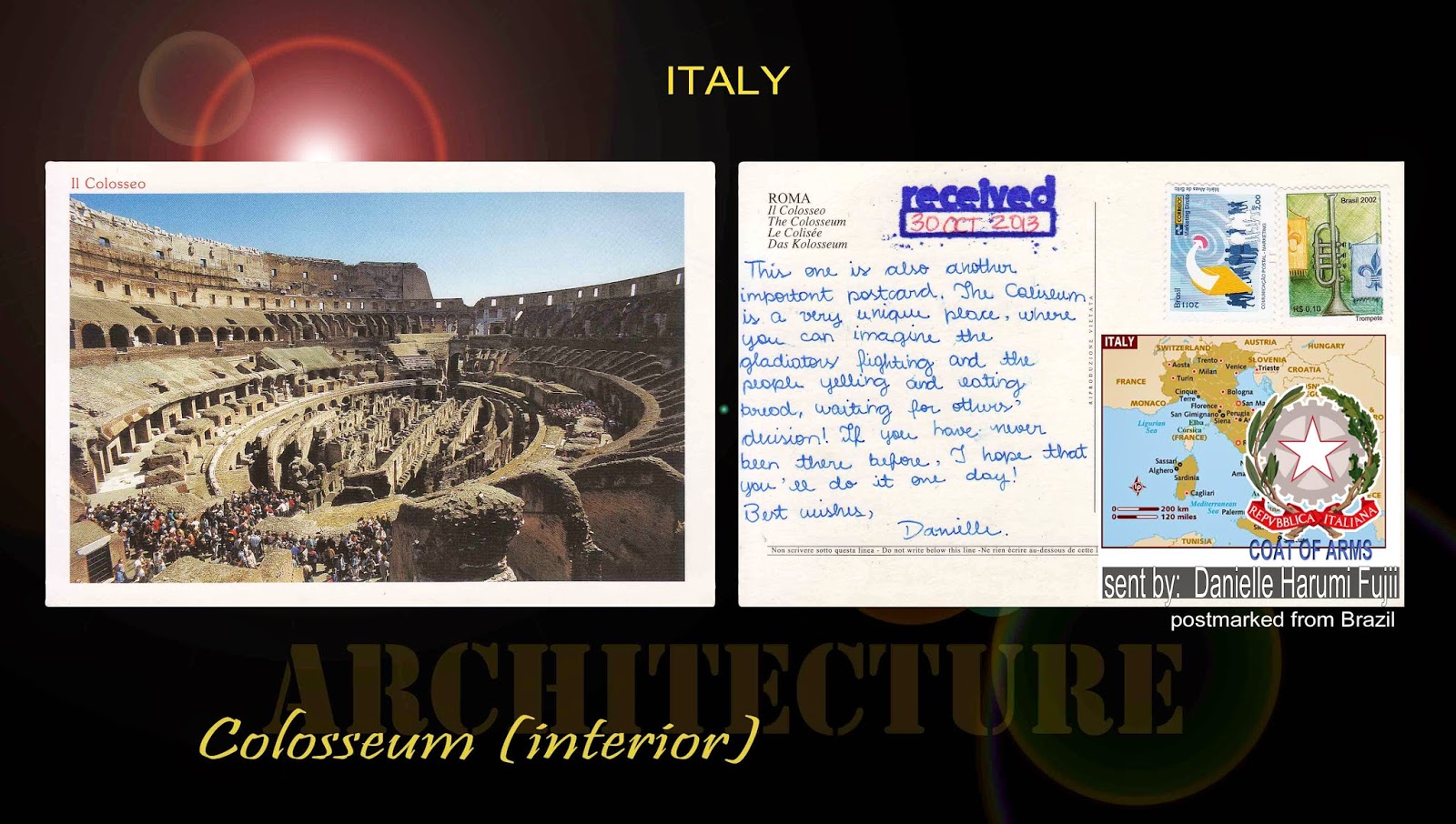 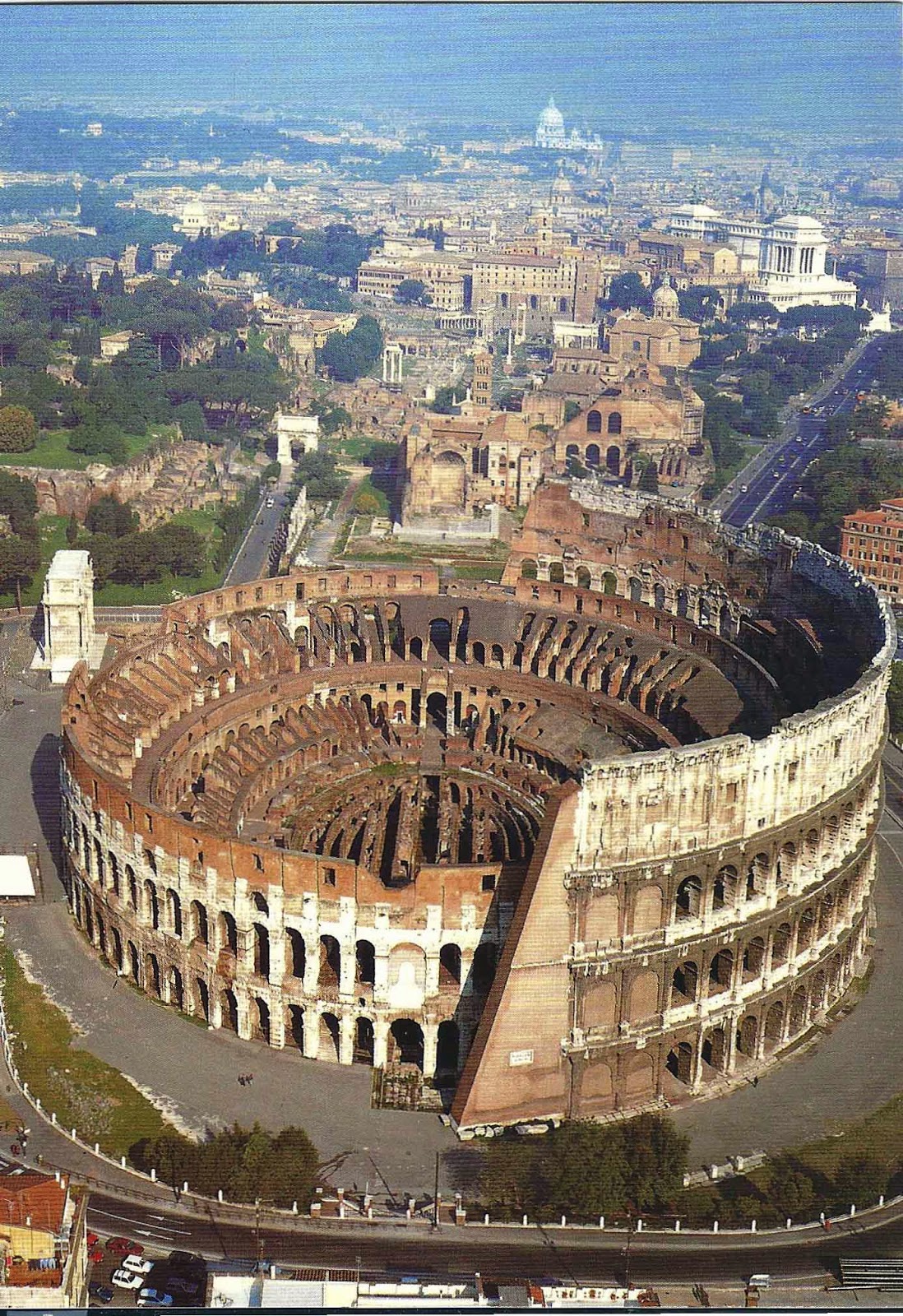 A ring of corbels on the outside of the top storey held anchorage-masts for a huge canvas sunshade. Beneath the arena were dens and rooms for animals and combatants.

The Circus of Maxentius had a large arena divided by a central spinal wall.  Stalls from which chariots started still recognizable.

6.  Tombs.  Since Roman law prohibited burial within city limits, tombs were generally placed along the main roads out of town.  The most magnificent were  mausolea, derived from Etruscan tumuli,  In 2nd century AD temple-shaped tombs, usually in brick, became popular.

The Mausoleum of Hadrian, greatly tampered with over the centuries and now the Castle of S Angelo, originally had a square podium surmounted by a drum.  On the roof was a garden containing a cylindrical tower with a chariot on top.  Tomb chamber was at heart of building; reached by a spiralling passage from beneath.. 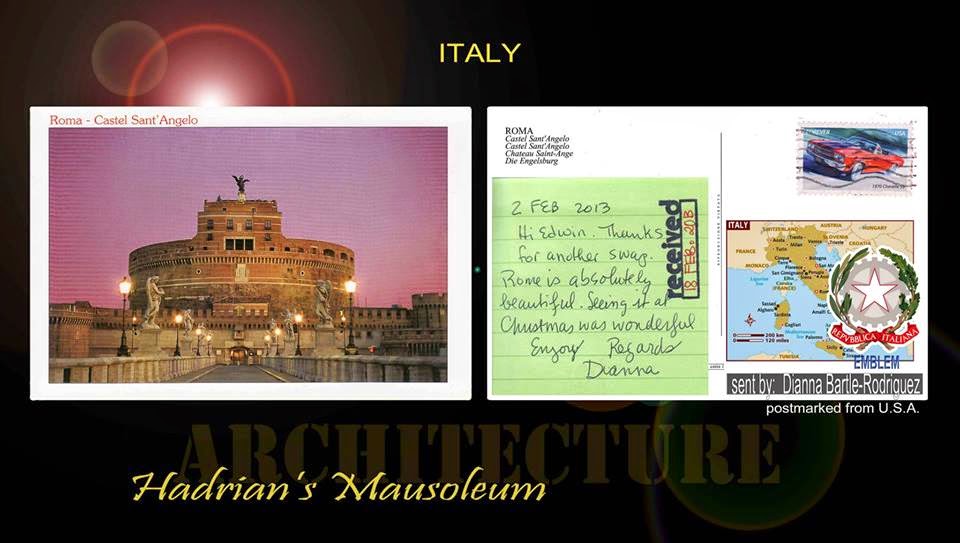 Among other examples are monumental Tomb of Caecilia Metella, on the Via Appia, featuring frieze of ox-skulls and garlands; crenellations are medieval.  The temple-shaped Tomb of Annia Regilla near the same road, has excellent brickwork; the podium contains the sepulchre, with mortuary chapel above.

The Pyramid of Cestius is an ancient pyramid in Rome, Italy, near the Porta San Paolo and the Protestant Cemetery.  It stands at a fork between two ancient roads, the Via Ostiensis and another road that ran west to the Tiber along the approximate line of the modern Via della Marmorata.  The tomb had been sealed when it was built, with no exterior; it is not possible for visitors to access the interior, except by special permission typically only granted to scholars. 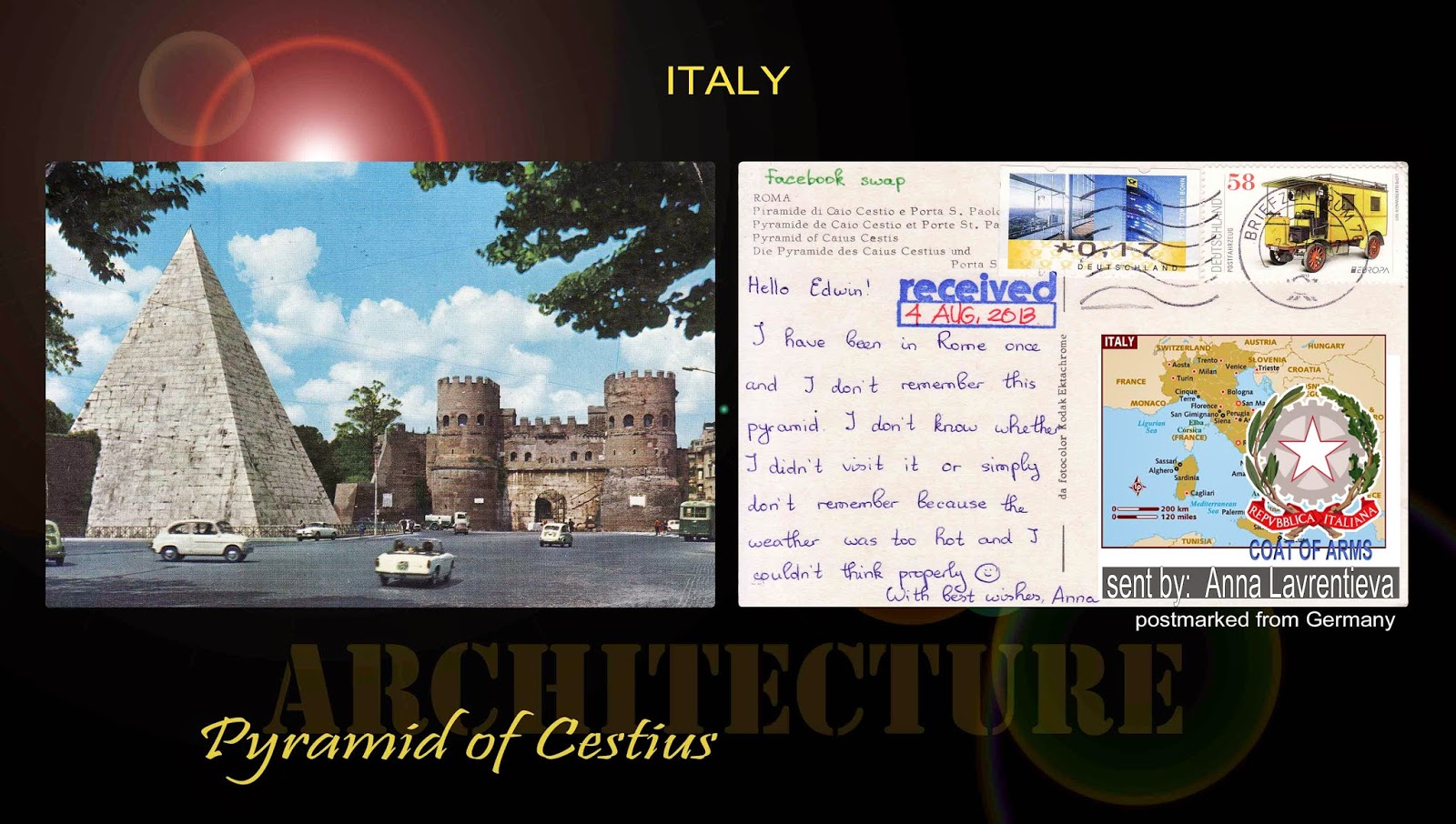 7.  Triumphal Arches.  Although the earliest arches date from circa 200 BC, surviving examples are Augustan or later.  Their function was to commemorate Imperial victories with reliefs, inscriptions and statues.  Openings were either single or triple, between piers ornamented with Corinthian or Composite columns or pilasters.

The Arch of Titus, commemorating the capture of Jerusalem, has attached Composite columns, the first known examples.  The inside of the arch has a coffered upper part above relief panels showing on one side of the Emperor riding in triump, on the other the spoils of victory.  Above upper tier was a bronze chariot and 4 angle statues.

The white marble triple Arch of Septimius Severus, in the Forum Romanum, celebrated victories against the Parthians; detached Composite columns (see no. 5 from postcard below). 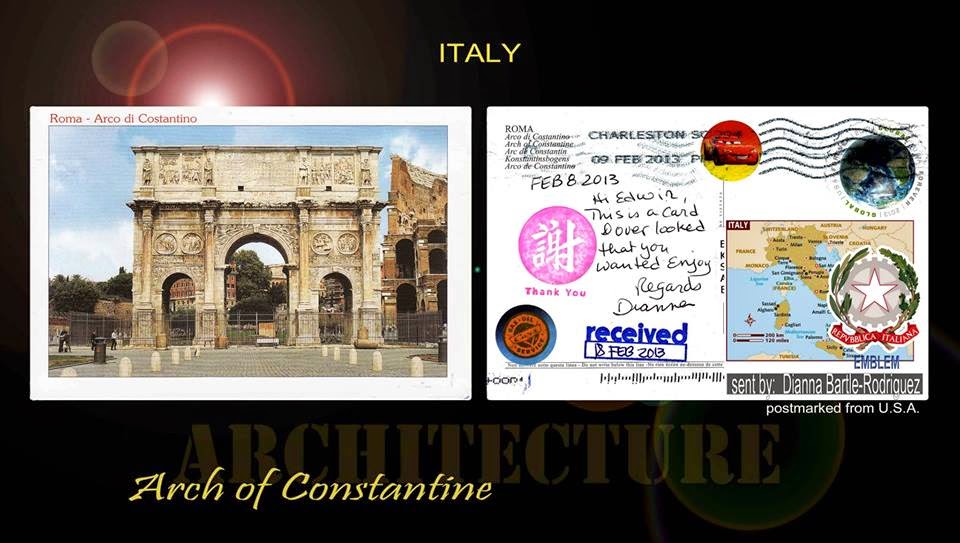 The marble Doric Column of Trajan, 40 m high was built in Trajan's Forum in the reign when the Empire reached its furthest extent.  Spiralling low reliefs depict the war with the Dacians in about 2,500 realistic figures.  Upper parts could be viewed from libraries to either side.  In podium was Trajan's tomb.

The Column of Marcus Aurelius is similar to Trajan's but shorter, with larger, deeper-cut figures.