INTRODUCTION
Renaissance Architecture is the European architecture of the period between the early 14th and early 17th centuries in different regions, demonstrating a conscious revival and development of certain elements of ancient Greek and Roman thought and material culture. Stylistically, Renaissance architecture followed Gothic architecture and was succeeded by Baroque architecture. Developed first in Florence, with Filippo Brunelleschi as one of its innovators, the Renaissance style quickly spread to other Italian cities. The style was carried to France, Germany, England, Russia and other parts of Europe at different dates and with varying degrees of impact.

Renaissance style places emphasis on symmetry, proportion, geometry and the regularity of parts as they are demonstrated in the architecture of classical antiquity and in particular ancient Roman architecture, of which many examples remained. Orderly arrangements of columns, pilasters and lintels, as well as the use of semicircular arches, hemispherical domes, niches and aedicules replaced the more complex proportional systems and irregular profiles of medieval buildings.

RENAISSANCE CEILING
Roofs are fitted with flat or coffered ceilings. They are not left open as in Medieval architecture. They are frequently painted or decorated. A god example of which is the Sistine Chapel ceiling.The Sistine Chapel ceiling, painted by Michelangelo between 1508 and 1512, is a cornerstone work of High Renaissance art. The ceiling is that of the Sistine Chapel, the large papal chapel built within the Vatican between 1477 and 1480 by Pope Sixtus IV, for whom the chapel is named. It was painted at the commission of Pope Julius II. The chapel is the location for papal conclaves and many other important services

Courses, mouldings and all decorative details are carved with great precision. Studying and mastering the details of the ancient Romans was one of the important aspects of Renaissance theory. The different orders each required different sets of details. Some architects were stricter in their use of classical details than others, but there was also a good deal of innovation in solving problems, especially at corners. Mouldings stand out around doors and windows rather than being recessed, as in Gothic Architecture. Sculptured figures may be set in niches or placed on plinths. They are not integral to the building as in Medieval architecture.

RENAISSANCE WALL  External walls are generally constructed of brick, rendered, or faced with stone in highly finished ashlar masonry, laid in straight courses. The corners of buildings are often emphasised by rusticated quoins. Basements and ground floors were often rusticated, as at the Palazzo Medici Riccardi (1444–1460) in Florence. Internal walls are smoothly plastered and surfaced with lime wash. For more formal spaces, internal surfaces are decorated with frescoes. 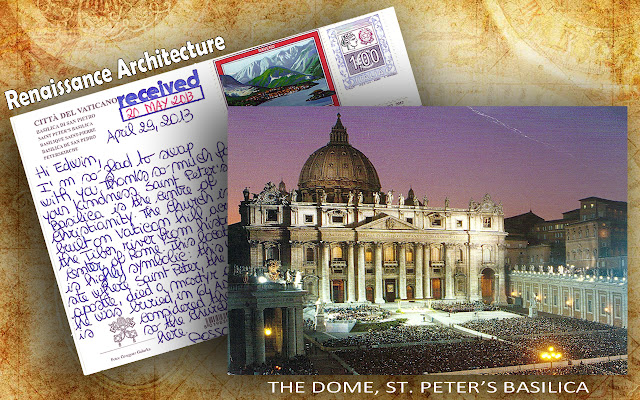 In Renaissance Architecture, the dome is used frequently, both as a very large structural feature that is visible from the exterior, and also as a means of roofing smaller spaces where they are only visible internally. After the success of the dome in Brunelleschi’s design for the Basilica di Santa Maria del Fiore and its use in Bramante’s plan for St. Peter's Basilica (1506) in Rome, the dome became an indispensable element in church architecture and later even for secular architecture, such as Palladio's Villa Rotonda.

The dome of St. Peter's rises to a total height of 136.57 metres (448.1 ft) from the floor of the basilica to the top of the external cross. It is the tallest dome in the world. Its internal diameter is 41.47 metres (136.1 ft), slightly smaller than two of the three other huge domes that preceded it, those of the Pantheon of Ancient Rome, 43.3 metres (142 ft), and Florence Cathedral of the Early Renaissance, 44 metres (144 ft). It has a greater diameter by approximately 30 feet (9.1 m) than Constantinople's Hagia Sophia church, completed in 537. It was to the domes of the Pantheon and Florence duomo that the architects of St. Peter's looked for solutions as to how to go about building what was conceived, from the outset, as the greatest dome of Christendom. 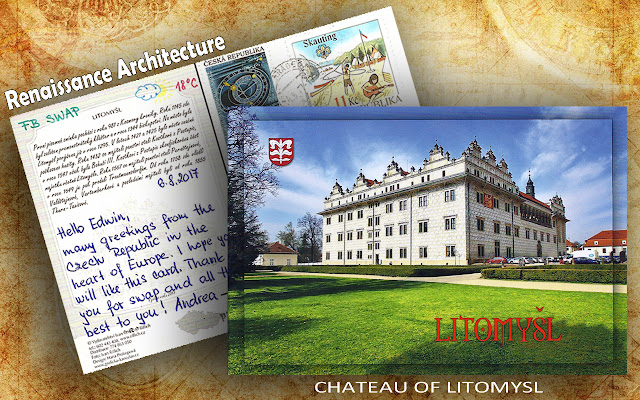 It is one of the biggest Renaissance castles in the Czech Republic. It is owned by the Czech state. It is located in the centre the town of Litomyšl and was declared a UNESCO Site in 1999. Litomyšl Castle is an outstanding example of the arcade castle, a type of building first developed in Italy and modified in the Czech lands to create an evolved form of special architectural quality.  High-Baroque features were added to this castle in the 18th century. 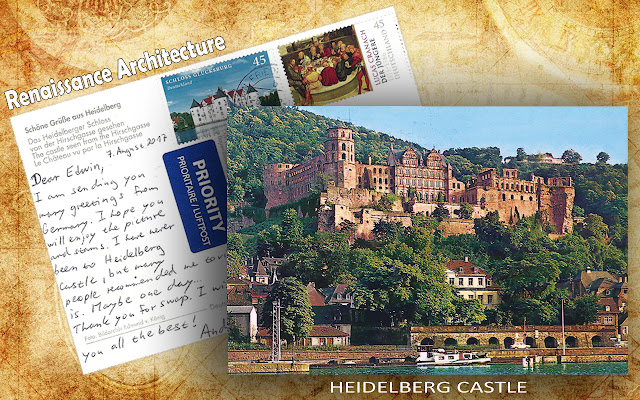 It is a ruin in Germany and landmark of Heidelberg. The castle ruins are among the most important Renaissance structures north of the Alps.
The castle has only been partially rebuilt since its demolition in the 17th and 18th centuries. It is located 80 metres (260 ft) up the northern part of the Königstuhl hillside, and thereby dominates the view of the old downtown. It is served by an intermediate station on the Heidelberger Bergbahn funicular railway that runs from Heidelberg's Kornmarkt to the summit of the Königstuhl.
The earliest castle structure was built before 1214 and later expanded into two castles circa 1294; however, in 1537, a lightning bolt destroyed the upper castle. The present structures had been expanded by 1650, before damage by later wars and fires. In 1764, another lightning bolt caused a fire which destroyed some rebuilt sections. 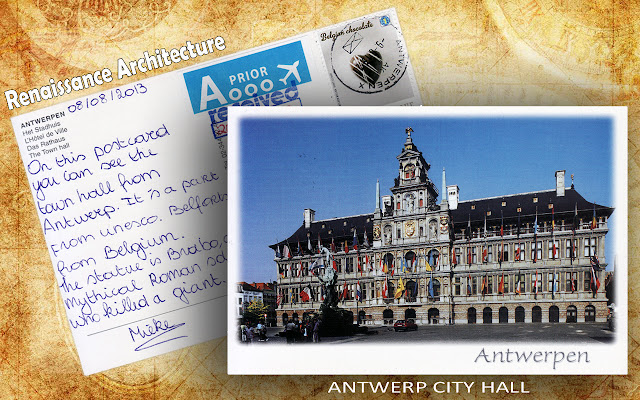 The Stadhuis (City Hall) of Antwerp, Belgium, stands on the western side of Antwerp's Grote Markt (Great Market Square). Erected between 1561 and 1565 after designs made by Cornelis Floris de Vriendt and several other architects and artists, this Renaissance building incorporates both Flemish and Italian influences. The Stadhuis is inscribed on UNESCO's World Heritage List along with the belfries of Belgium and France.


The richly ornamented central section, which rises above the eaves in diminishing stages, holds female statues representing Justice, Prudence, and the Virgin Mary, and bears the coats of arms of the Duchy of Brabant, the Spanish Habsburgs, and the Margraviate of Antwerp. 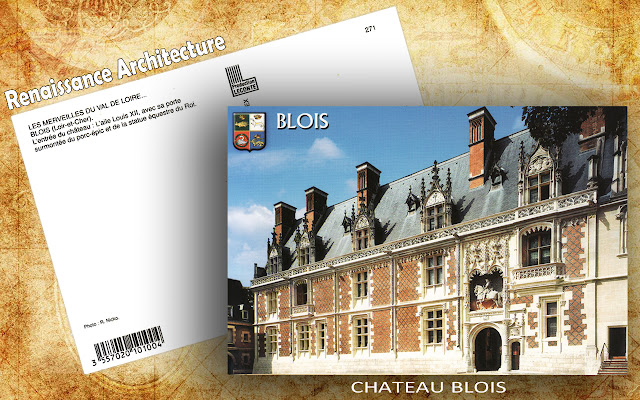 Dominating the Loire River, the royal castle of Blois is not only one of the most prestigious Renaissance monuments in France but also a brilliant illustration of the evolution of the French architecture from the Middle ages to the 17th century. 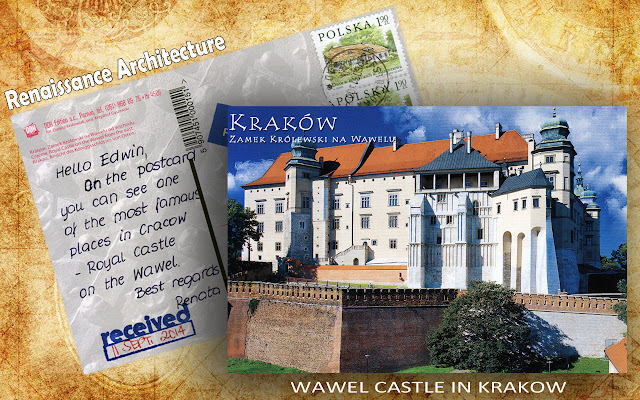 
It  is a castle residency located in central Kraków, Poland. Built at the behest of King Casimir III the Great, it consists of a number of structures situated around the Italian-styled main courtyard. The castle, being one of the largest in Poland, represents nearly all European architectural styles of medieval, renaissance and baroque periods. The Wawel Royal Castle and the Wawel Hill constitute the most historically and culturally significant site in the country. In 1978 it was declared a UNESCO World Heritage Site as part of the Historic Centre of Kraków. 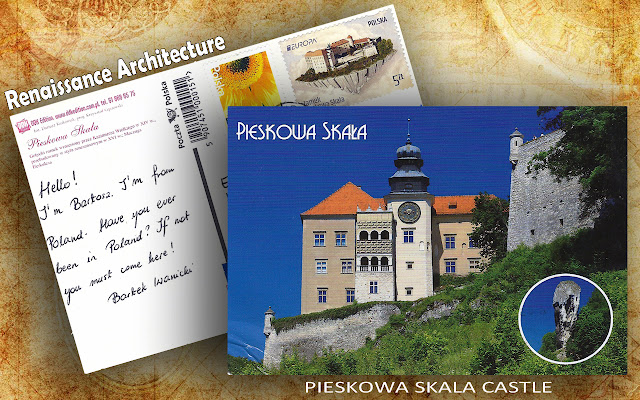 Polish for Little Dog's Rock, is a limestone cliff in the valley of river Prądnik, Poland, best known for its Renaissance castle. It is located within the boundaries of the Ojców National Park, 27 km north of Kraków, near the village of Sułoszowa. The castle was first mentioned in Latin documents of Polish king Władysław I the Elbow-high (Władysław Łokietek) before 1315, as "castrum Peskenstein". 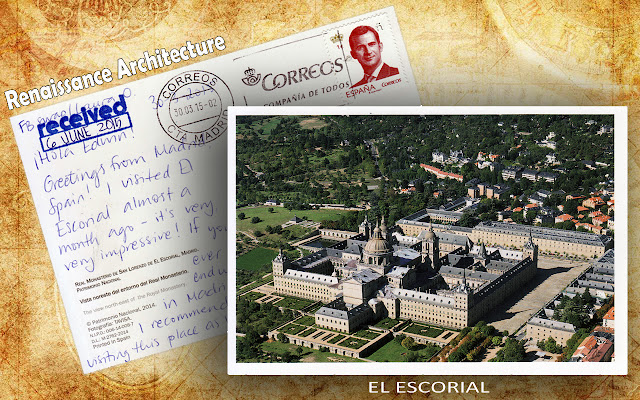 It comprises two architectural complexes of great historical and cultural significance: the royal monastery itself and La Granjilla de La Fresneda, a royal hunting lodge and monastic retreat about five kilometres away. These sites have a dual nature; that is to say, during the 16th and 17th centuries, they were places in which the power of the Spanish monarchy and the ecclesiastical predominance of the Roman Catholic religion in Spain found a common architectural manifestation. El Escorial was, at once, a monastery and a Spanish royal palace. Originally a property of the Hieronymite monks, it is now a monastery of the Order of Saint Augustine. It is also a boarding school (Real Colegio de Alfonso XII) 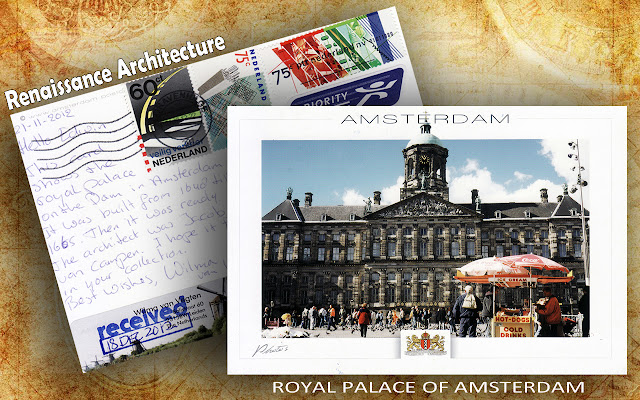 THE ROYAL PALACE OF AMSTERDAM

It is situated on the west side of Dam Square in the centre of Amsterdam, opposite the War Memorial and next to the Nieuwe Kerk. The palace was built as a city hall during the Dutch Golden Age in the 17th century. The building became the royal palace of King Louis Napoleon and later of the Dutch Royal House. 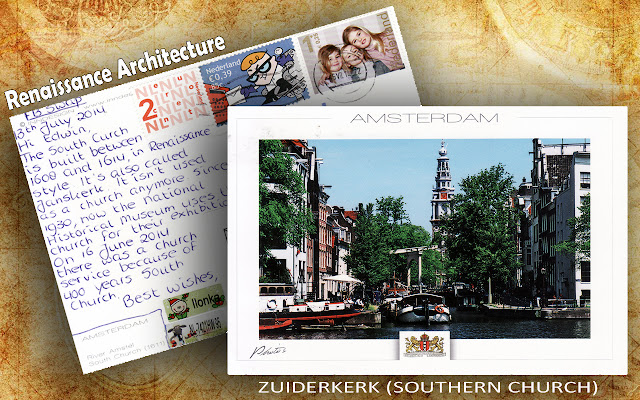 The design of the church in Amsterdam Renaissance style is by Hendrick de Keyser, who was also buried in the church in 1621. A memorial stone was placed on top of his tomb in 1921. De Keyser designed the church as a pseudo-basilica in Gothic style, with a central nave and two lower side aisles, six bays long, with Tuscan columns, timber barrel vaults and dormers. The stained glass in the rectangular windows was replaced by transparent glass in the 17th Century. The richly detailed tower is a square stone substructure, on which an octagonal sandstone section stands with free-standing columns on the corners. On top of this is a wooden, lead-covered spire. 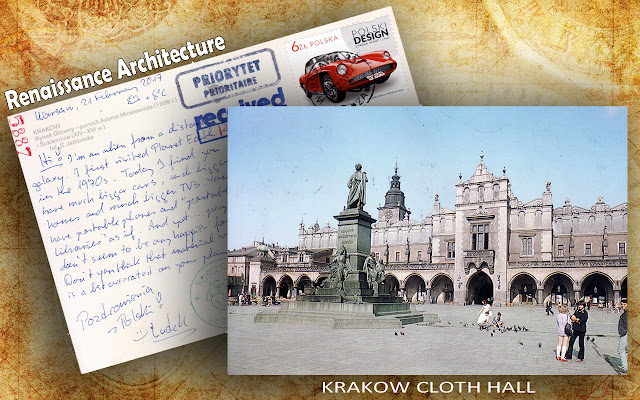 It dates to the Renaissance and is one of the city's most recognizable icons. It is the central feature of the main market square in the Kraków Old Town (listed as a UNESCO World Heritage Site since 1978). 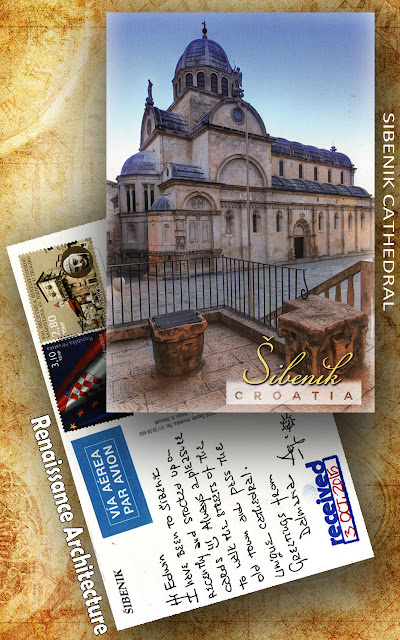 The Cathedral of St. James  in Šibenik, Croatia is a triple-nave basilica with three apses and a dome (32 m high inside) in the city of Šibenik, Croatia. It is the church of the Catholic Church in Croatia, and the see of the Šibenik diocese. It is also the most important architectural monument of the Renaissance in the entire country. Since 2000, the Cathedral has been on the UNESCO World Heritage List. 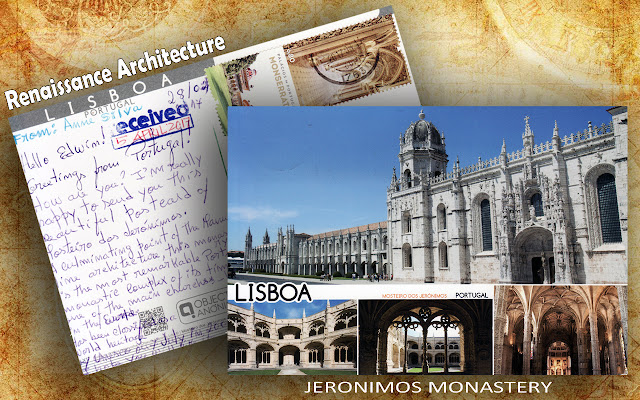 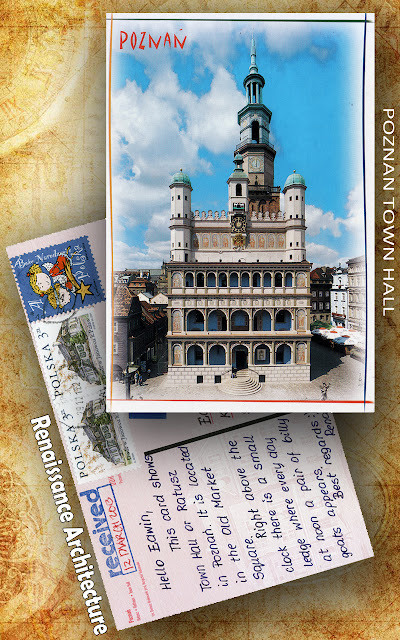 is a historic building in the city of Poznań in western Poland, located at the Poznań Old Town in the centre of Old Market Square (Stary Rynek). It used to serve as the Seat of local government until 1939, and now houses a museum. The town hall was originally built in the late 13th century following the founding of the medieval city in 1253; it was rebuilt in roughly its present-day form, in mannerist style, with an ornate loggia, by Giovanni Battista di Quadro in 1550–1560. The display of mechanical fighting goats, played out daily at noon above the clock on the front wall of the building, is one of the city's main tourist attractions. 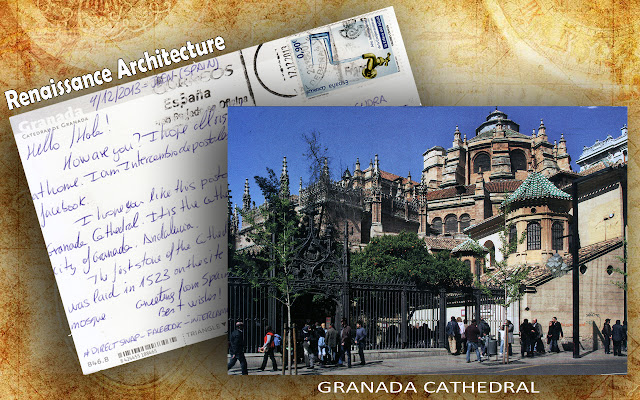 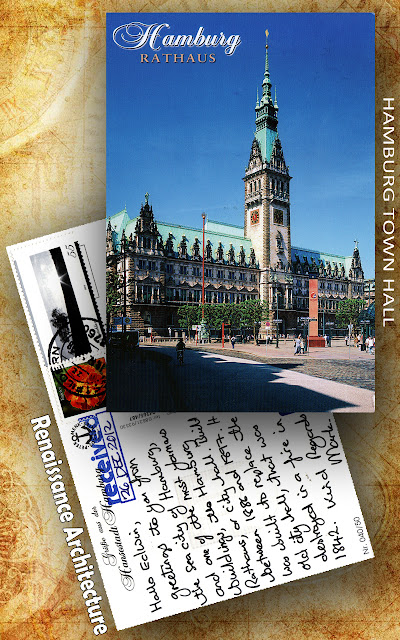 On the outside the architectural style is neo-renaissance, which is abandoned inside for several historical elements. It is one of the few completely preserved buildings of historicism in Hamburg. Built in a period of wealth and prosperity, in which the Kingdom of Prussia and its confederates defeated France in the Franco-German War and the German Empire was formed, the look of the new Hamburg Rathaus was intended to express this wealth and also the independence of the State of Hamburg and Hamburg's republican traditions. 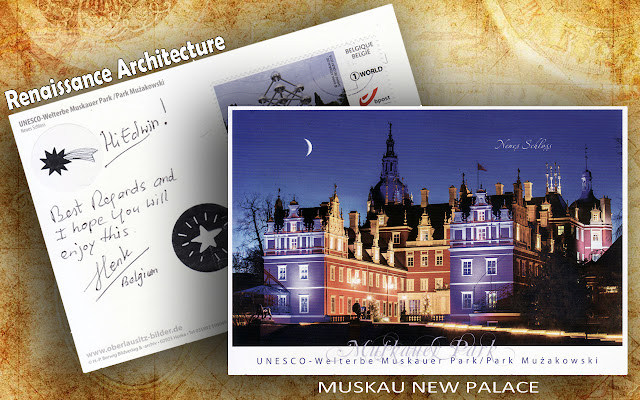