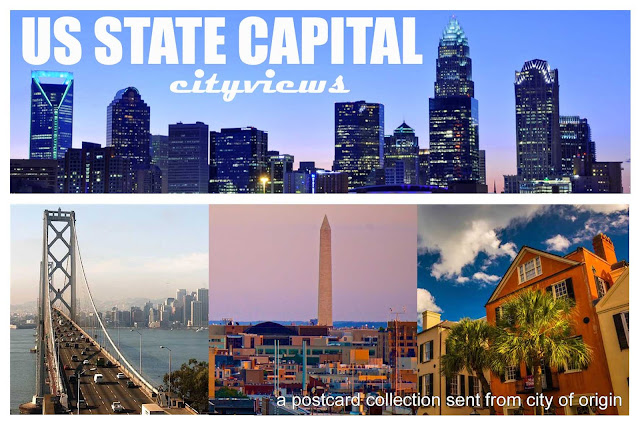 Sacramento became a city through the efforts of the Swiss immigrant John Sutter, Sr., his son John Sutter, Jr., and James W. Marshall. Sacramento grew quickly thanks to the protection of Sutter's Fort, which was established by Sutter in 1839. During the California Gold Rush, Sacramento was a major distribution point, a commercial and agricultural center, and a terminus for wagon, trains, stagecoaches, riverboats, the telegraph, the pony Express, and the First Transcontinental Railroad.

After the Civil War ended in 1865, Atlanta was gradually rebuilt. Due to the city's superior rail transportation network, the state capital was moved to Atlanta from Milledgeville in 1868.

In 1845, Kamehameha III moved the permanent capital of the Hawaiian Kingdom from Lahaina on Maui to Honolulu. He and the kings that followed him transformed Honolulu into a modern capital, erecting buildings susch as St. Andrew's Cathedral, 'Iolani Palace, and Ali'iolani Hale. At the same time, Honolulu became the center of commerce in the islands, with descendants of American missionaries establishing major businesses in downtown Honolulu.

In 1820, Indianapolis was selected as the new state capital, replacing Corydon, which had served the role since the state was formed in 1816. While most American state capitals tend to be near the centers of their respective states, Indianapolis is the closest to its state's exact center. It was founded on the White River because of this, and because of the assumption that the river would serve as a major transportation artery. However, the waterway proved to be too sandy for trade. Jeremiah Sullivan, a judge of the Indiana Supreme Court, invented the name Indianapolis by joining Indiana with polis the Greek word for city; Indianapolis literally means "Indiana City".

The European-American history of Baton Rouge dates from 1699, when French explored Sieur d'Ibervilleleading an exploration party up the Mississippi River saw a reddish cypress pole festooned with carcasses marking the boundary between the  Houma and Bayou Goula tribal hunting grounds. They called the pole and its location  le bâton rouge, or the red stick. The local Native American name for the site was Istrouma.

In 1694, soon after the overthrow of the Catholic government of Thomas Lawrence, Francis Nicholson moved the capital of the royal colony to Anne Arundel's Towne and renamed the town Annapolis after Princess Anne of Denmark and Norway, soon to be the Queen of Great Britain. Annapolis was incorporated as a city in 1708.

The first English settlers in Massachusetts, the Pilgrims, arrived via the Mayflower at Plymouth in 1620, and developed friendly relations with the native Wampanoag people. This was the second successful permanent English colony in North America, after the Jamestown Colony. The Pilgrims were soon followed by other Puritans, who established the Massachusetts Bay Colony at present-day Boston in 1630.

Founded near historic Native American settlements as a trading and transportastion center, the city rose to prominence when it was named the capital of the Minnesota Territory in 1849. Though Minneapolis is better-known nationally, Saint Paul contains the state government and other important institutions. Regionally, the city is known for the Xcel Energy Center, home of the Minnesota Wild, and for the Science Museum of Minnesota. As a business hub of the Upper Midwest, it is the headquarters of companies such as Ecolab. Saint Paul, along with its Twin City, Minneapolis, is known for its high literacy rate. It was the only city in the United States with a population of 250,000 or more to see an increase in circulation of Sunday newspapers in 2007.

After Ohio achieved statehood in 1803, political infighting among prominent Ohio leaders resulted in the state capital moving from Chilicothe to Zanesville and back again. State legislature finally decided that a new capital city, located in the center of the state, was a necessary compromise. They chose Columbus because of its central location within the state, and proximity to major transportation routes (primarily rivers). The legislature chose it as the capital over a number of other competitors, including Franklinton, Dublin, Worthington and Delaware. Prior to the state legislature decision in 1812, Columbus did not exist. The city was designed from the first as the capital. Named in honor of Christopher Columbus, the capital city was founded on February 14, 1812, on the "High Banks opposite Franklinton at the Forks of the Scioto most known as Wolf's Ridge". At the time, this area was a dense forestland used only as a hunting ground.

The town of Nashville was founded by James Robertson, John Donelson and a party of Overmountain  Men in 1779, near the original Cumberland settlement of Fort Nashborough. It was named for Francis Nash, the American Revolutionary War hero. Nashville quickly grew because of its strategic location, accessibility as a port on the Cumberland River, a tributary of the Ohio River; and its later status as a major railroad center. By 1800, the city had 345 residents, including 136 African American slaves and 14 free blacks. In 1806, Nashville was incorporated as a city and became the county seat of Davidson County, Tennessee. In 1843, the city was named the permanent capital of the state of Tennessee.

In the 1830s, pioneers began to settle the area in central Austin along the Colorado River. After Republic of Texas Vice President Mirabeau B. Lamar visited the area during a buffalo-hunting expedition between 1837 and 1838, he proposed that the republic's capital then located in Houston, be relocated to the area situated on the north bank of the Colorado River near the present-day Congress Avenue Bridge. In 1839, the site was officially chosen as the republic's new capital (the republic's seventh and final location) and was incorporated under the name Waterloo. Shortly thereafter, the name was changed to Austin in honor of Stephen F. Austin, the "Father of Texas" and the republic's first secretary of state.

On July 5, 1867, General Grenville M. Dodge and his survey crew platted the site now known as Cheyenne in Dakota Territory (later Wyoming Territory). This site was chosen as the point at which the Union Pacific Railroad crossed Crow Creek, a tributary of the South Platte River. The city was not named by Dodge, as his memoirs state, but rather by friends who accompanied him to the area Dodge called Crow Creek Crossing". It was named for the American Indian Cheyenne nation, one of the most famous and prominent Great Plains tribes closely allied with the Arapaho.