The Story of Architecture in Ancient Greece 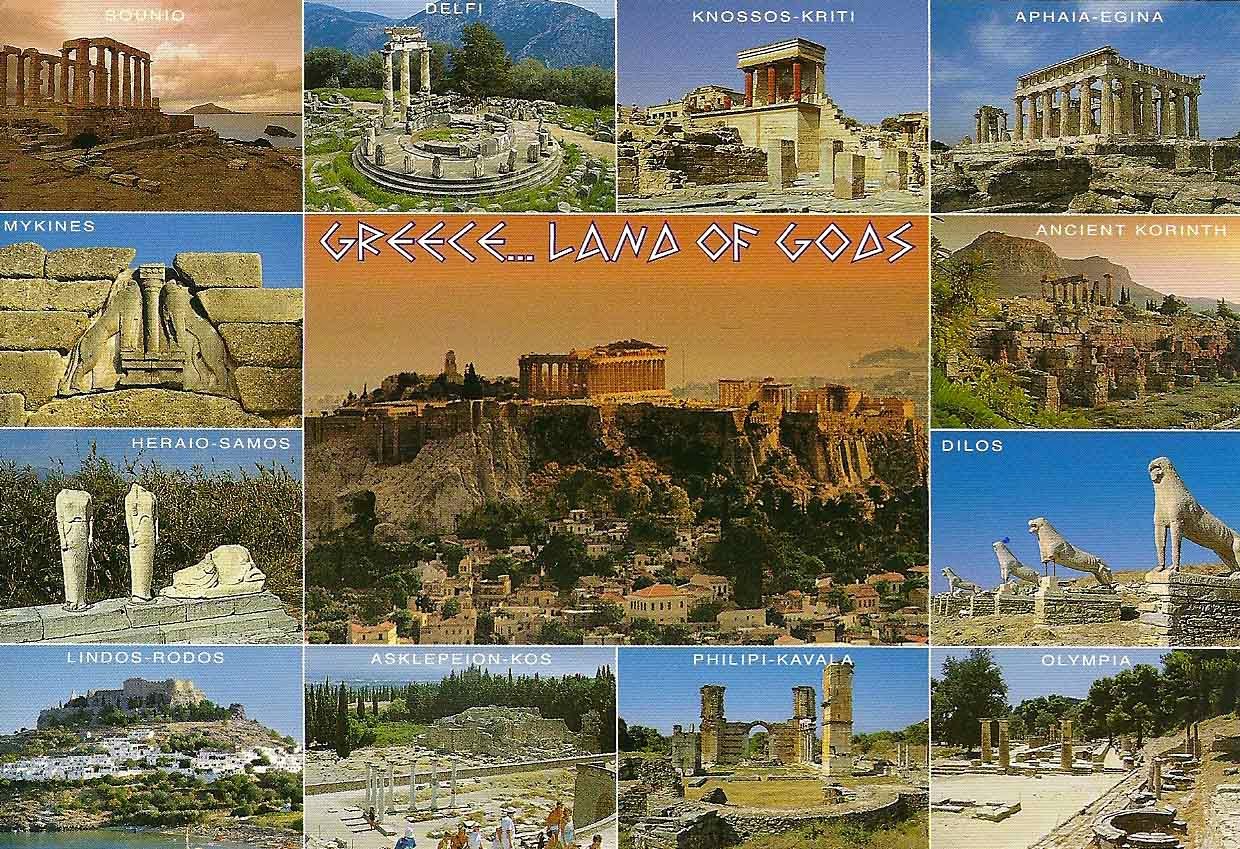 The architecture of ancient Greece was the foundation of many subsequent styles in different parts of the world, as well as offering the most sophisticated and aesthetically perfect body of work in the Western European tradition.  Extant Greek architecture consists essentially of public buildings, especially temples and theatres.  Few ordinary houses have survived.

DISCLAIMER:  All text from this blog entry are taken from the book The Story of Architecture by Patrick Nuttgens.
THE CLASSICAL ORDERS

Major Greek architecture is trabeated (made from columns and beams).  The column is a module for the whole building:  with its capital and base it corresponds to one of three fundamental styles, known as the Classical Orders.

Doric Order
The earliest Order was Doric, characterized by powerful-looking columns (usually with 20-sharp-edge flutings) without a base.  Column height is about 4 to 6 x base diameter, increasing to 7-1/4 x in Hellenistic period. 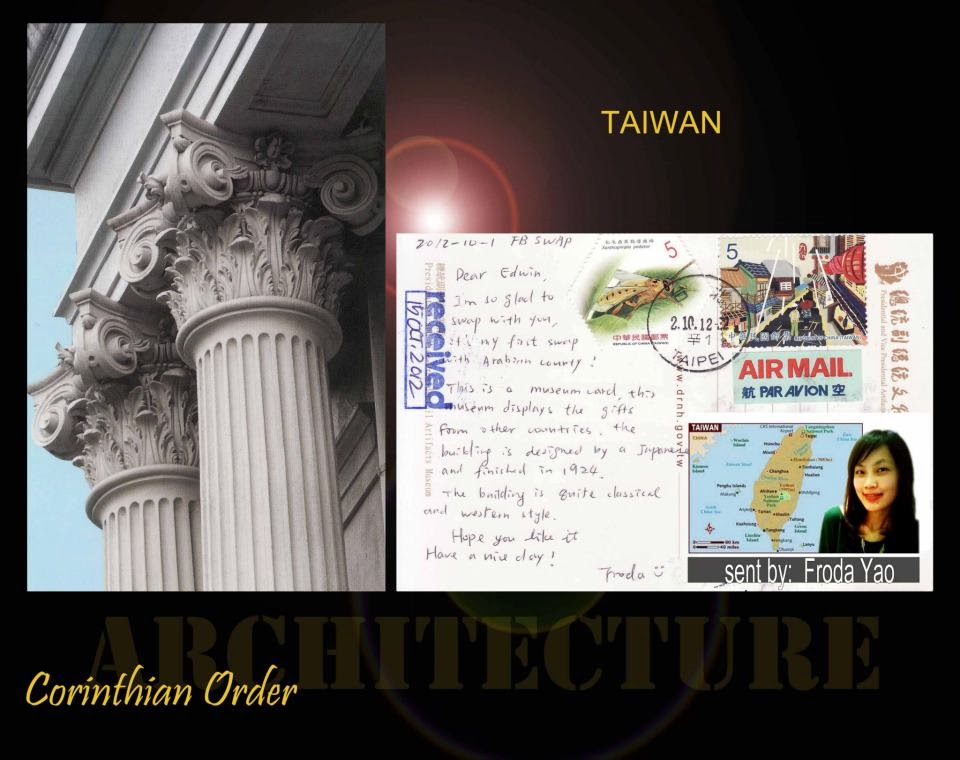 The Palace of Minos, Knossos chief building on Crete (now partly reconstructed), gave the title Minoan to the Creta style.  Plan was complex, with ingenious disposition of open and closed spaces round central court. 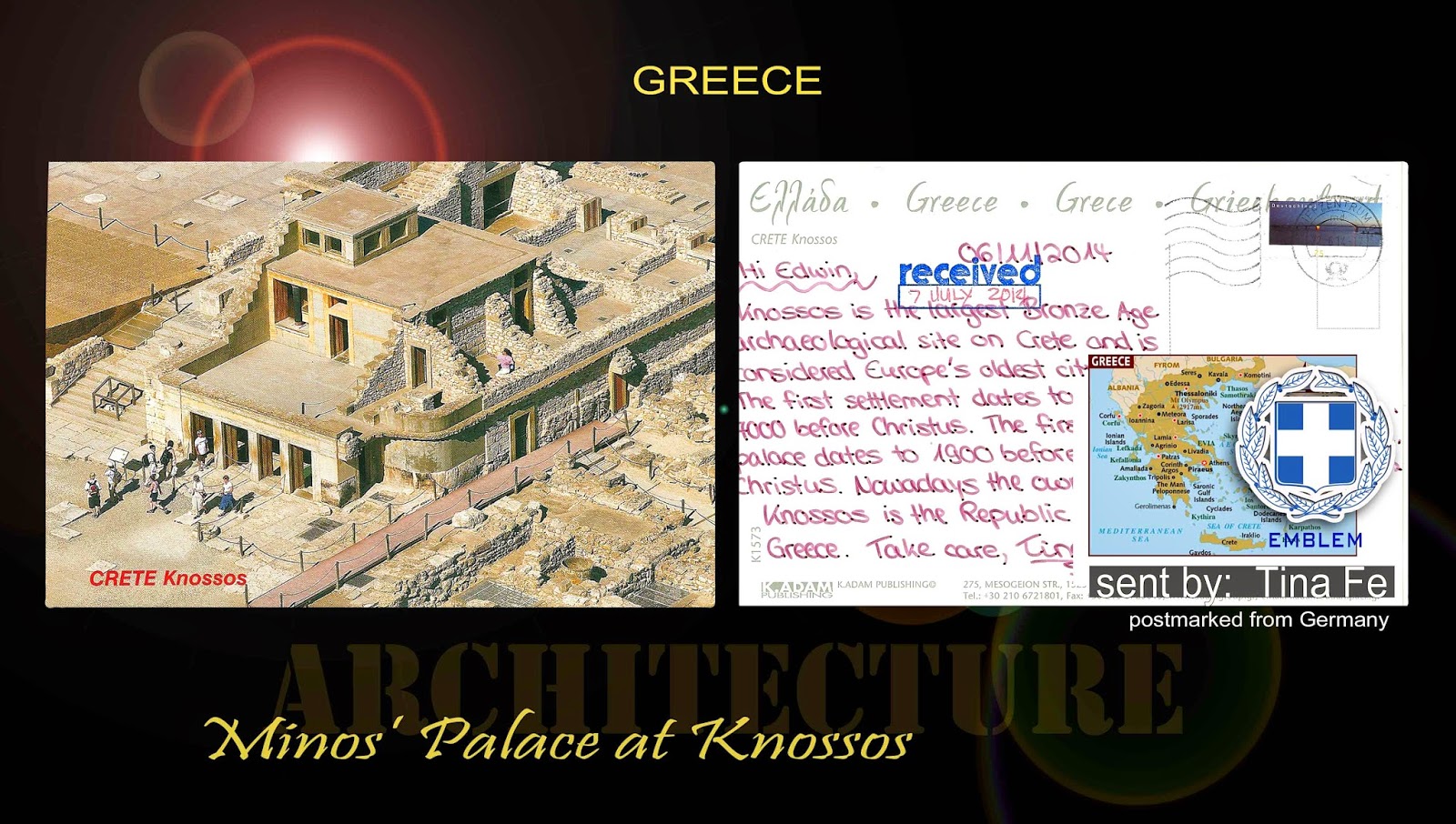 Minos' Palace at Knossos.  The 6 acres (24,000 square meter) of the palace included a theatre, a main entrance on each of its four cardinal faces, and extensive storerooms (also called magazines).  The palace used advanced architectural techniques; for example, part of it was built up to five stories high. 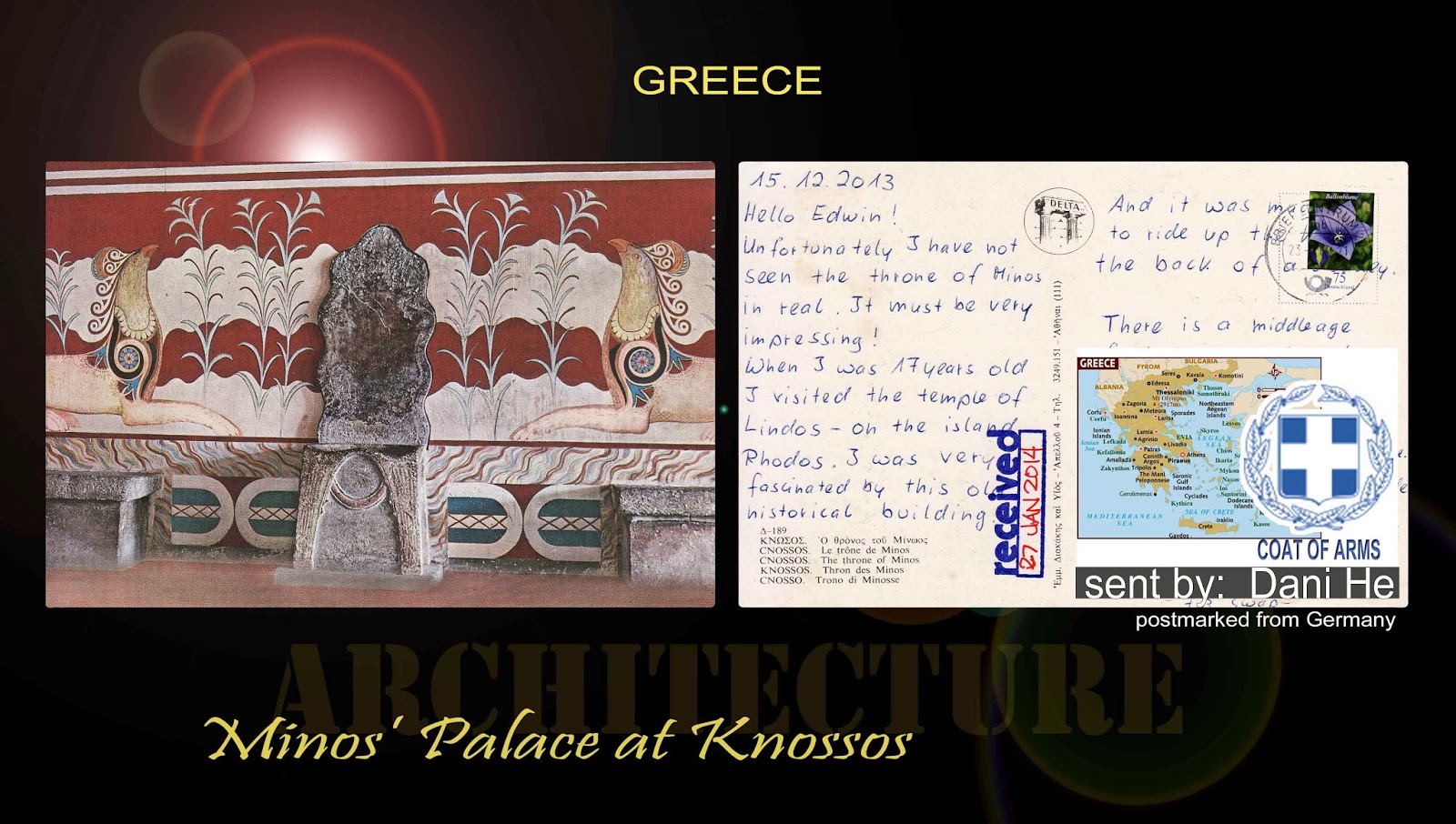 Minos' Palace Throne Room.  The centerpiece of the "Minoan" palace was the so-called Throne Room. The throned is flanked by the Griffin Fresco, with two griffins couchant (lying down) facing the throne, on either side.  Griffins were important mythological creatures, also appearing on seal rings, which were used to stamp the identities of the bearers into pliable material, such as clay or wax. 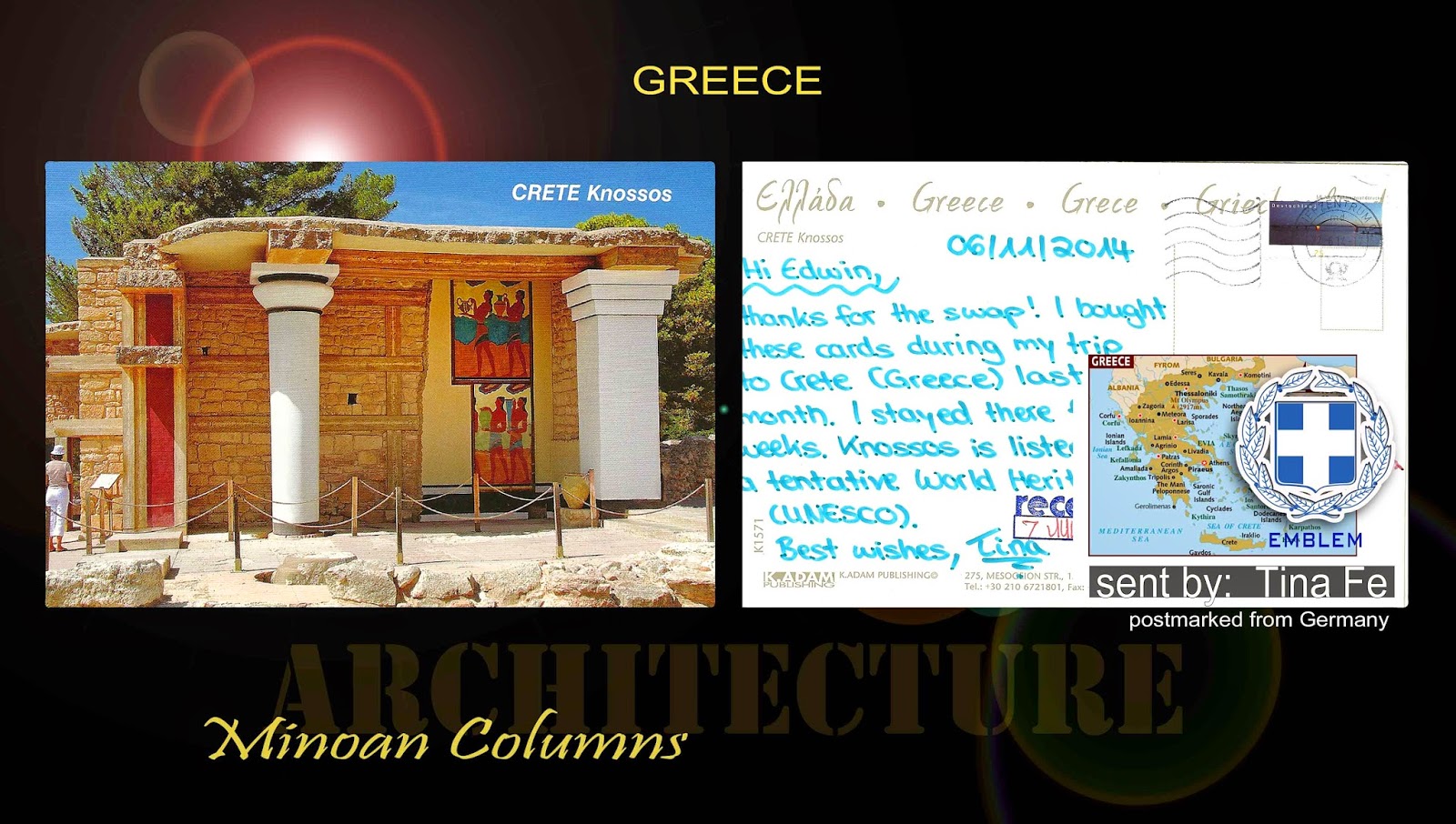 Minoan Columns.  The palace includes the Minoan column, a structure different from other Greek columns.  Unlike the stone columns that are characteristic of other Greek architecture, the Minoan column was constructed from the trunk of a cypress tree, common to the Mediterranean.  While most Greek columns are smaller at the top and wider at the bottom to creat the illusion of greater height (entasis), the Minoan columns are smaller at the bottom and wider at the top, a result of inverting the cypress trunk to prevent sprouting once in place.


THE MYCENAEANS
The coastal citadel, Tiryns was defended by massive walls and series of gates.  Central feature of palace was large megaron serving as throne.  The citdel of Mycenae looms menacingly above Argive plain,  Its best-known feature is the LION GATE; massive stone jambs bear a lintel spanning 3.2 m, above which is a triangular slab carved with pair of lions facing splayed column.

The near-by Treasury of Atreus is a tholos whose corbelled domed stone vault, within the hillside, is approached by an open wall passage. 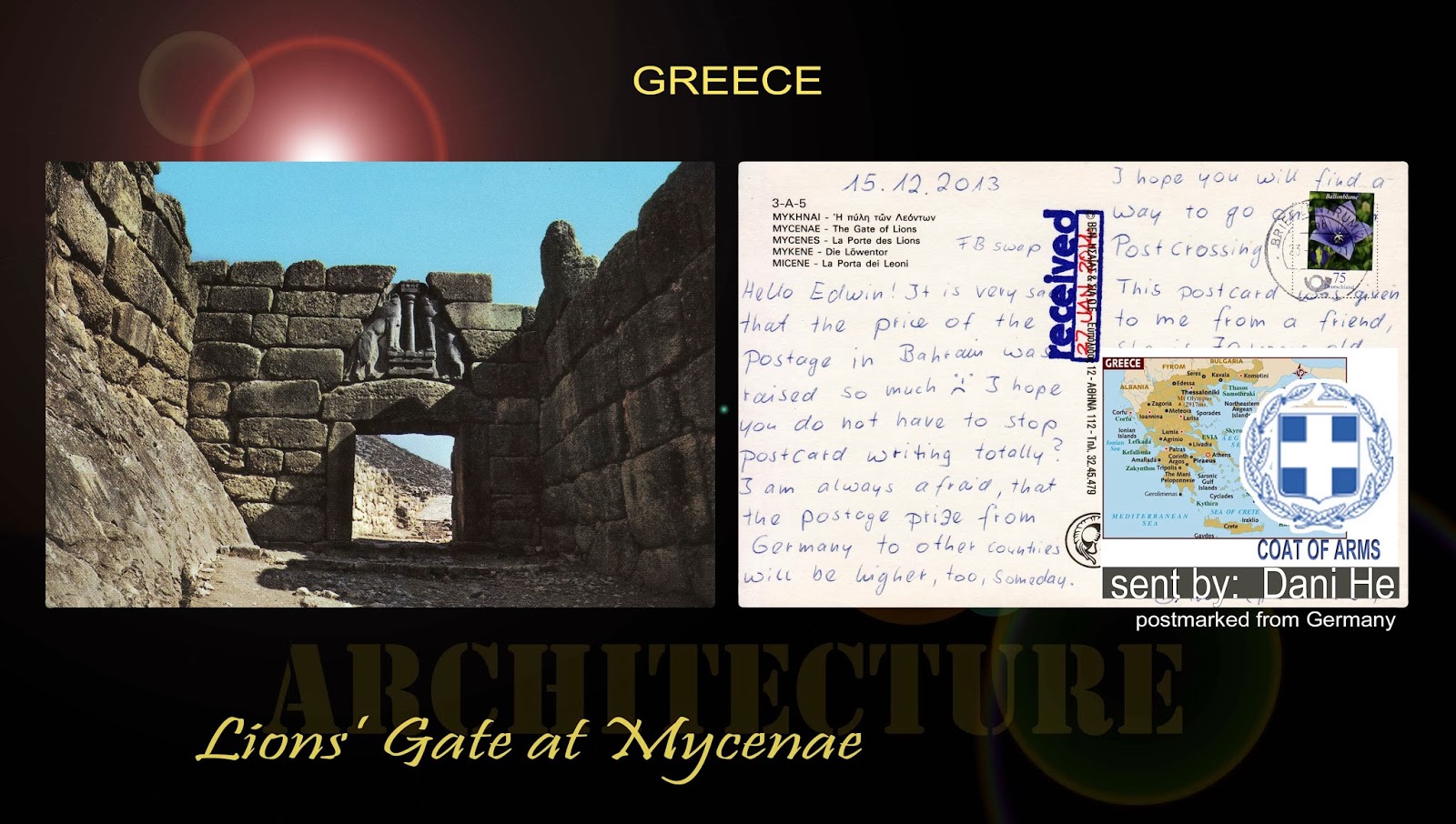 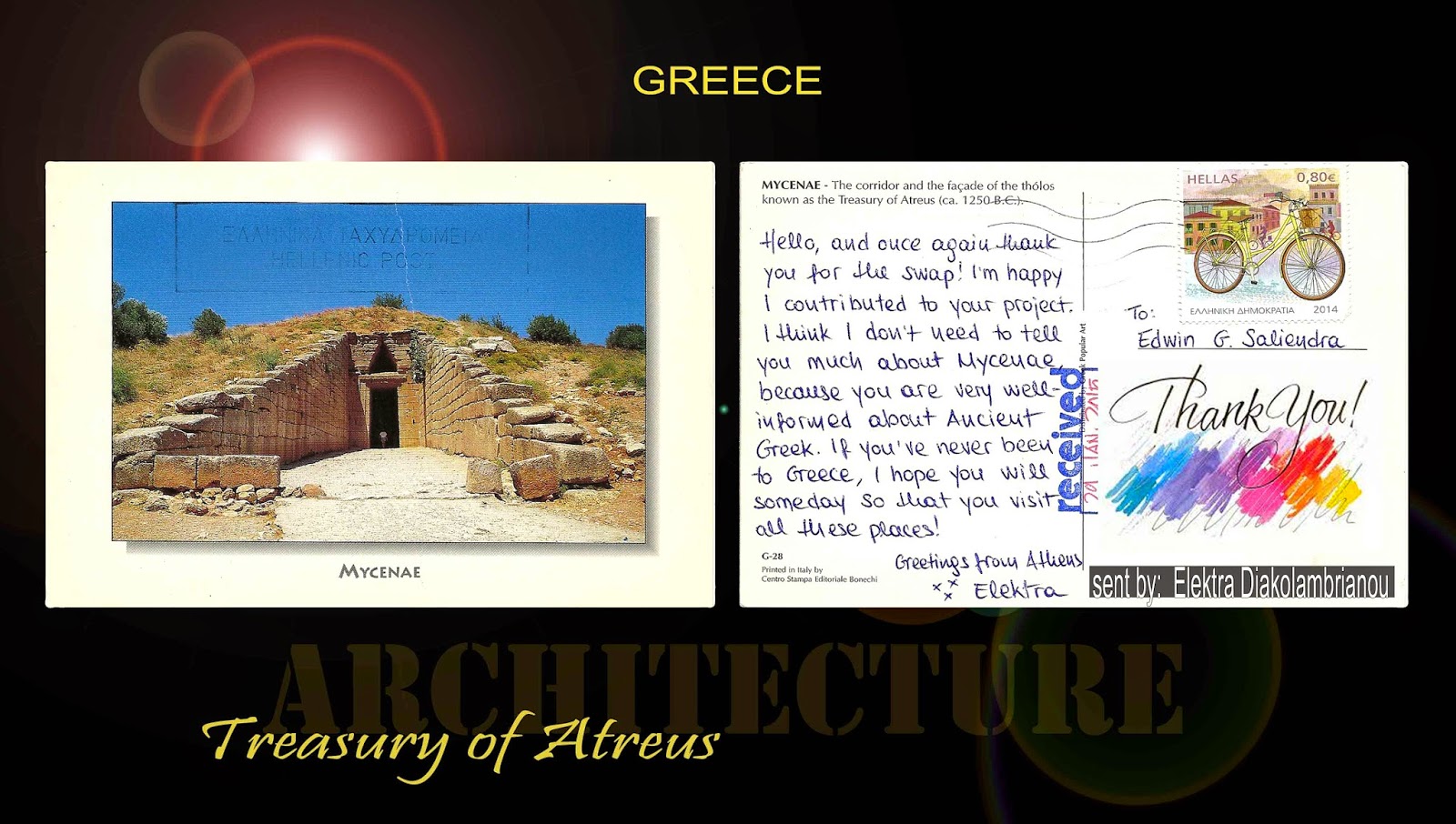 The Acropolis at Athens was the supreme site in the supreme city of ancient Greece.  It dominated the whole city and symbolically dwarfed an agora at its base.

An acropolis, or hilltop temenos, was a crucial element of the city state, the centre of the most important rituals of its public life.  Surrounded by a wall and entered through a propyleum (portico gateway), it contained one or more temples, votive monuments  and sometimes treasuries, and a stoa for shelter.

One characteristic of such sacred sites was the careful articulation of chaning levels, using paved terraces, to unify the buildings and emphasize the most important. 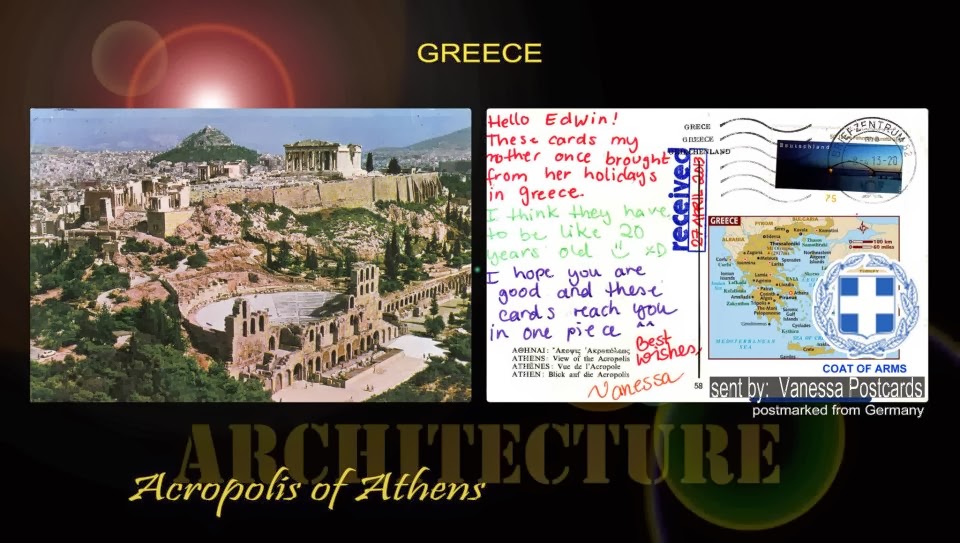 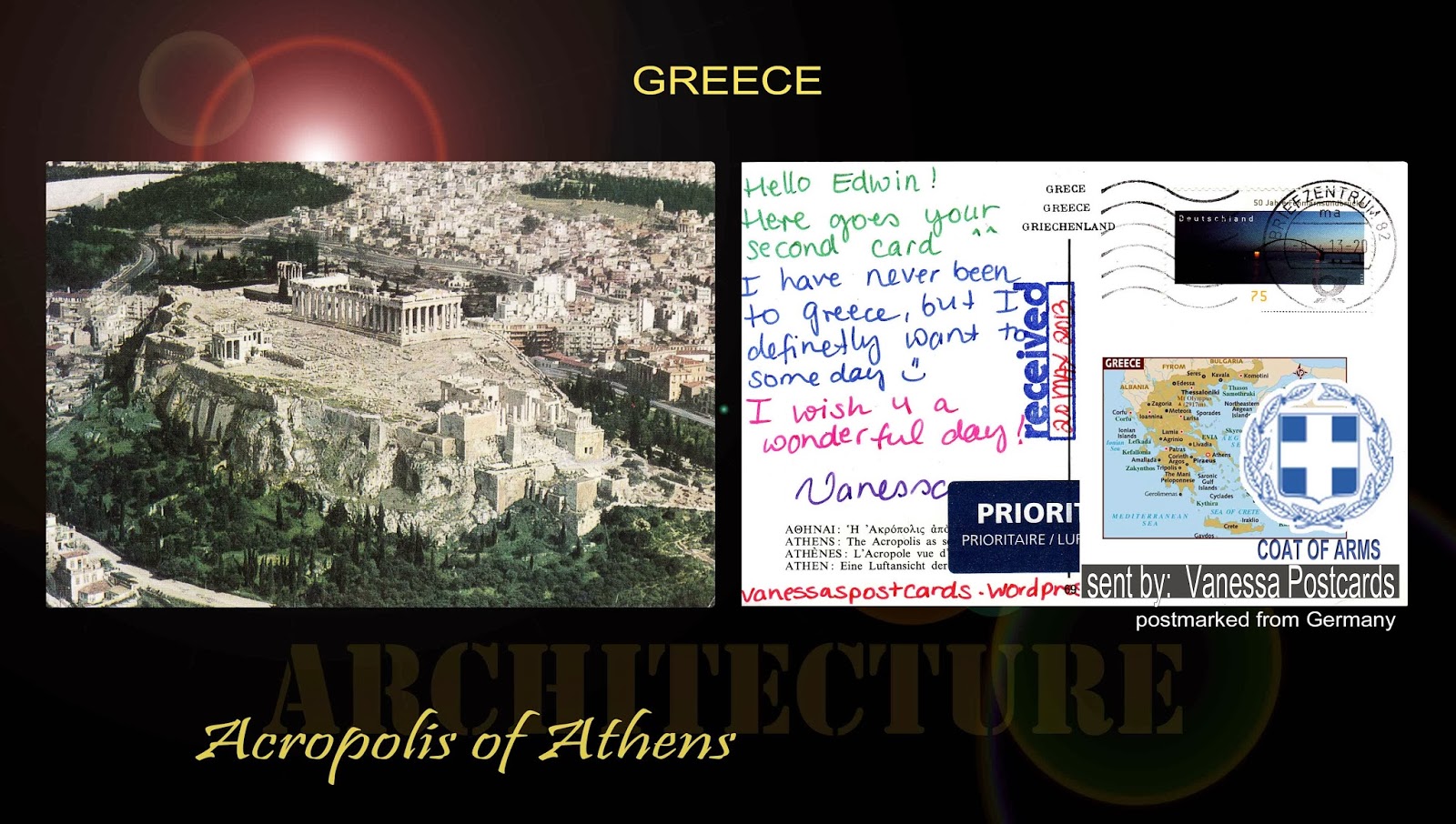 The subtlety of the Acropolis layout is best illustrated by the steps, ramps and columned spaces of the Propylaea with its forecourt and neighbouring buildings.  The architect Mnesicles achieved a unique fusion of grandeur and modesty appropriate to the entrance porch of the Acropolis.  Outer columns are Doric, while inner ones, in central passage, are slender Ionic- a brilliant juxtaposition. 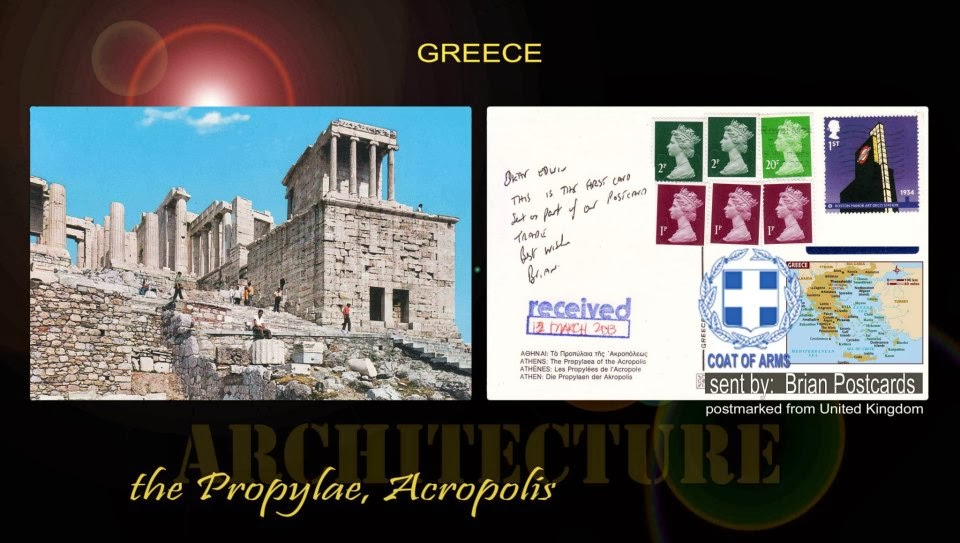 
The jewel of the Acropolis is the Parthenon, shrine of Athena, built in Pentelic marble by Ictinus and Callicrates, with Phidias as master sculptor.  Perfection was achieved by refinements of design to correct optical illusions. 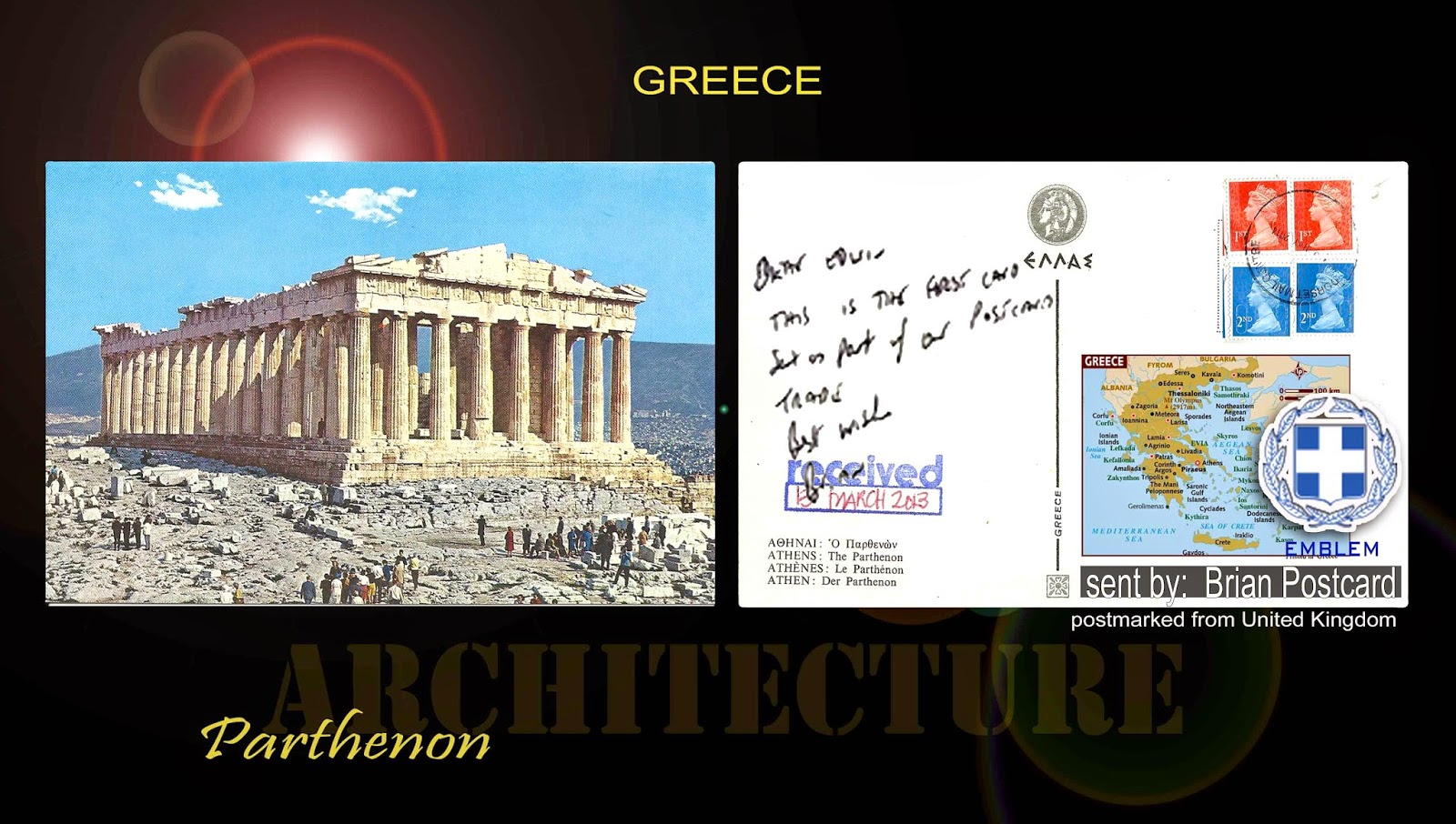 THE TEMPLE OF ATHENA NIKE


Callicrates' small, exquisite Temple of Athena Nike, perched to the right of the Propylaea, which was planned later but built first, is one of earliest surviving Ionic buildings in Athens.  The form is amphiprostyle: a portico at each end but no pteron.  Columns are short in proportion to diameter, perhaps to avoid too great a contrast with Propylaea. For first time in Greece architrave had three fasciae.

Probably by Mnesicles, the Erechtheion lacks a main facade and cannot be appreciated from a single viewpoint.  Its irregular planning on two levels was due to uneven site and need to include shrines to three deities.  The south porch is supported by sculptured caryatids.  Frieze of dark grey Elusian marble was decorated with white marble sculptures. 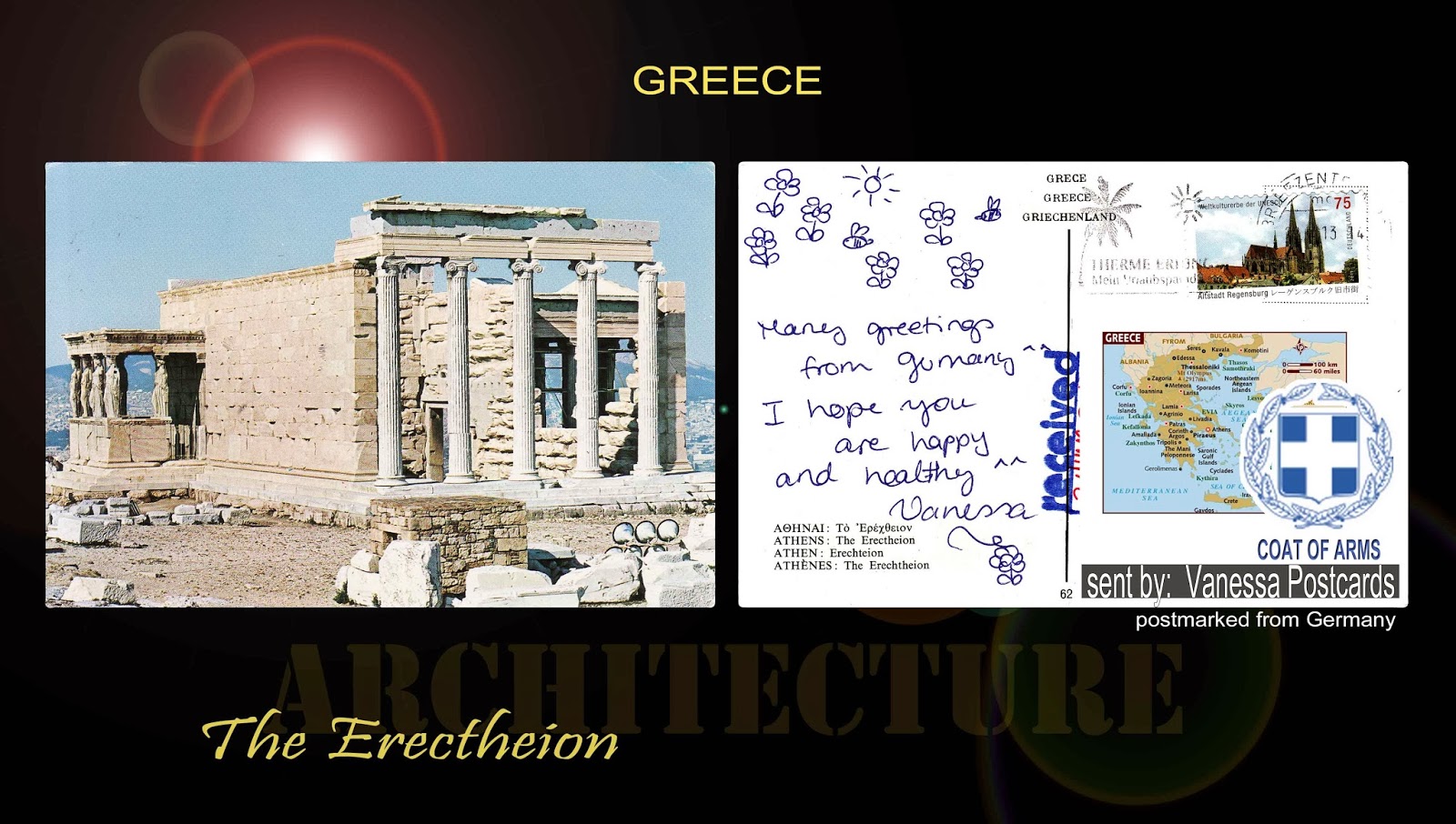 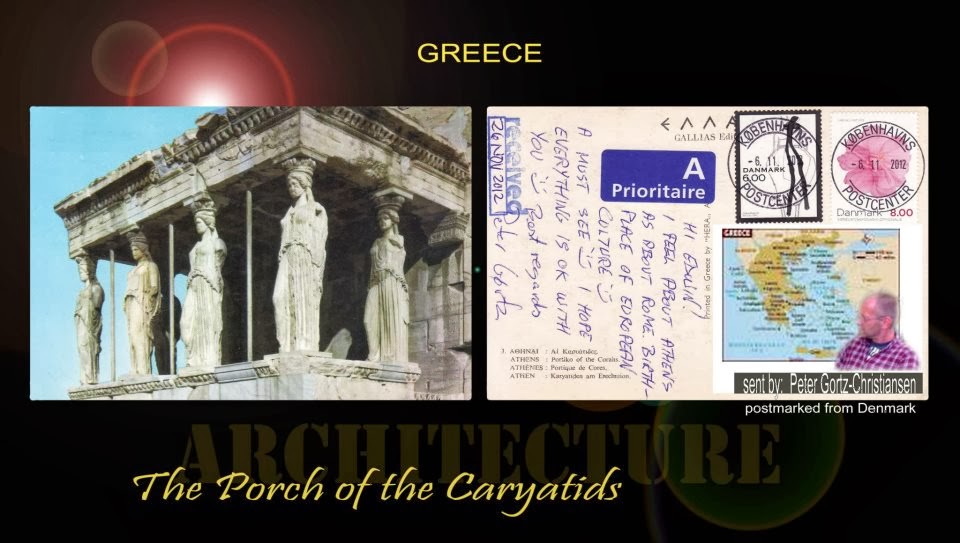 
The Temple of Hephaestus, or earlier as Theseus, was built mainly in marble a few years before Parthenon.  Arrangement of 6 x 13 Doric columns was classic after 500 B.C.  Metopes on east end and adjacent 4 on sides were sculptured, as were friezes over pronaos and opisthodomos.  The temple is the best-preserved, externally, of all Doric temples. 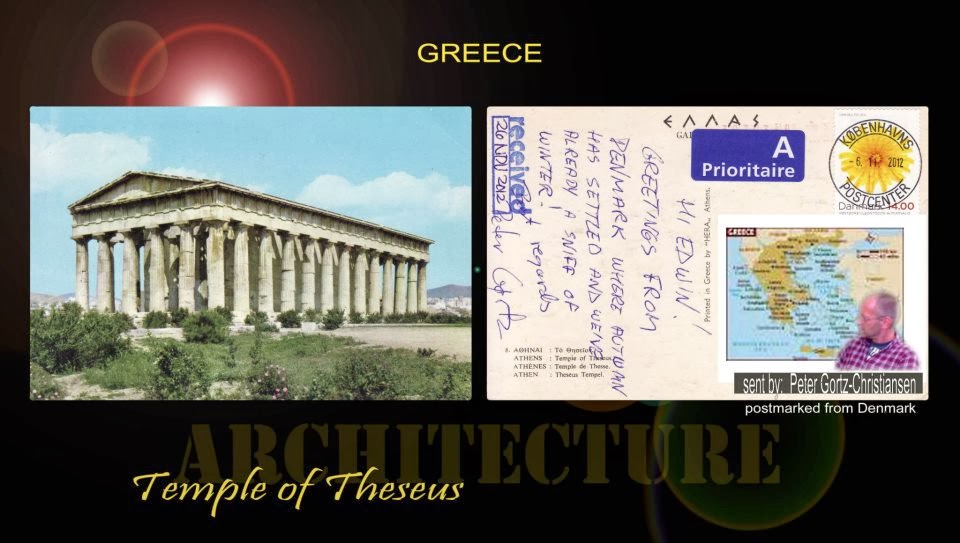 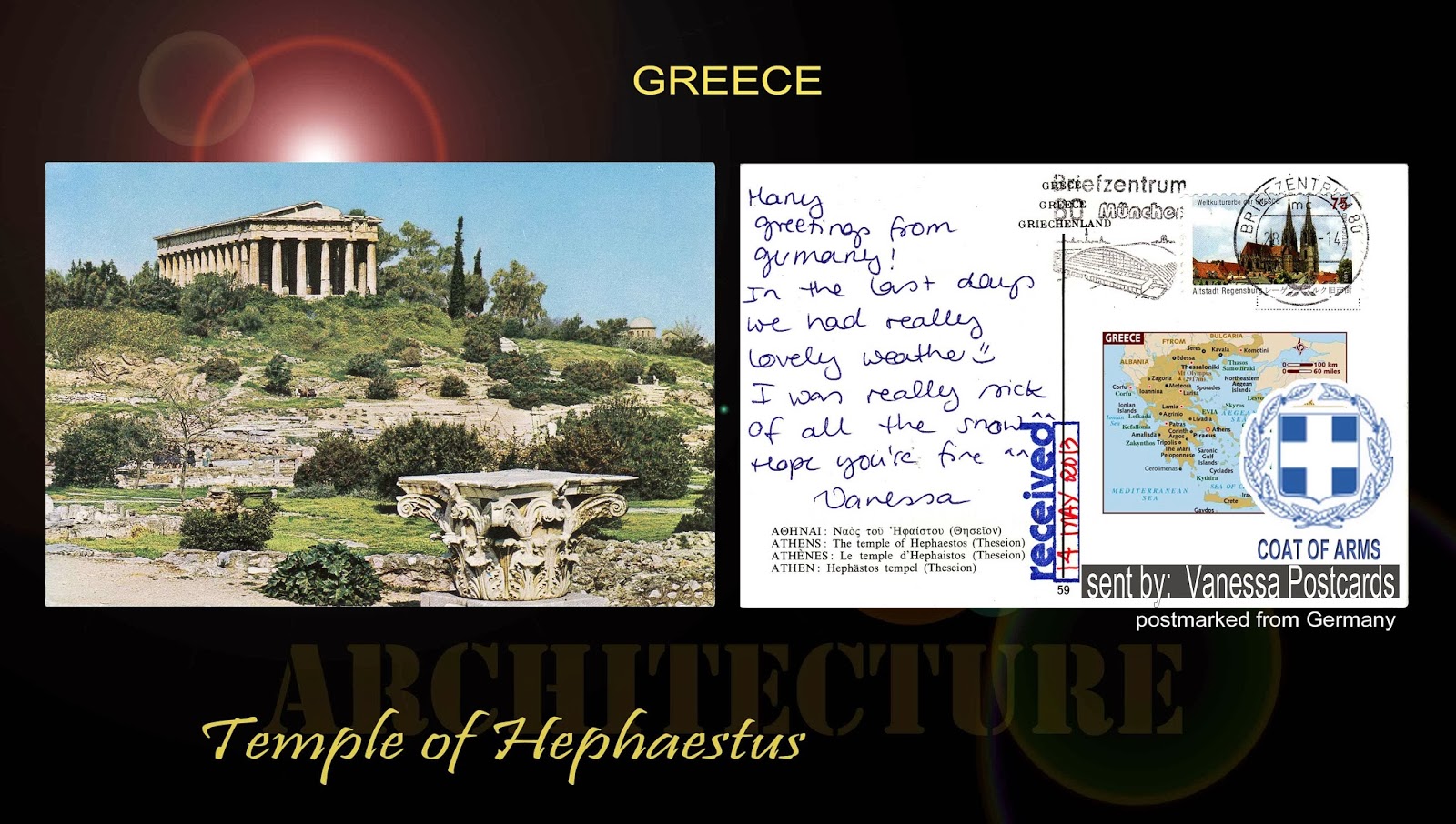 It was built in 161 AD by the Athenian magnate Herodes Atticus in memory of his wife, Aspasia Annia Regilla.  It was originally a steep-sloped amphitheater with a three-story stone front wall and a wooden roof made of expensive, cedar of Lebanon timber.  It was used as a venue for music concerts with a capacity of 5,000.  It lasted intact until it was destroyed and turned into a ruin by the Heruli in 267 AD. 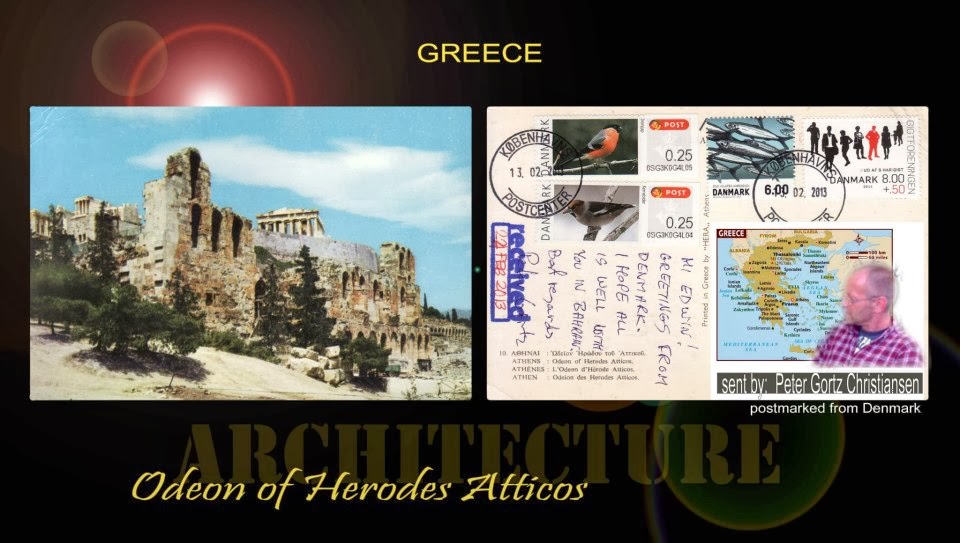 Also known as the Olympieion or Columns of the Olympian Zeus, is a colossal ruined temple in the centre of the Greek capital Athens that was dedicated to Zeus, king of the Olympian gods. Construction began in the century BC during the rule of the Athenian tyrants, who envisaged building the greatest temple in the ancient world, but it was not completed until the reign of the Roman Emperor Hadrian in the 2nd century AD some 638 years after the project had begun.  During the Roman periods it was renowned as the largest temple in Greece and housed one of the largest cult statues in the ancient world.
In the centuries after the fall of the Roman Empire, the temple was extensively quarried for building materials to supply building projects elsewhere in the city.  Despite this, substantial remains remain visible today and it continues to be a major tourist attraction.  [READ MORE HERE] 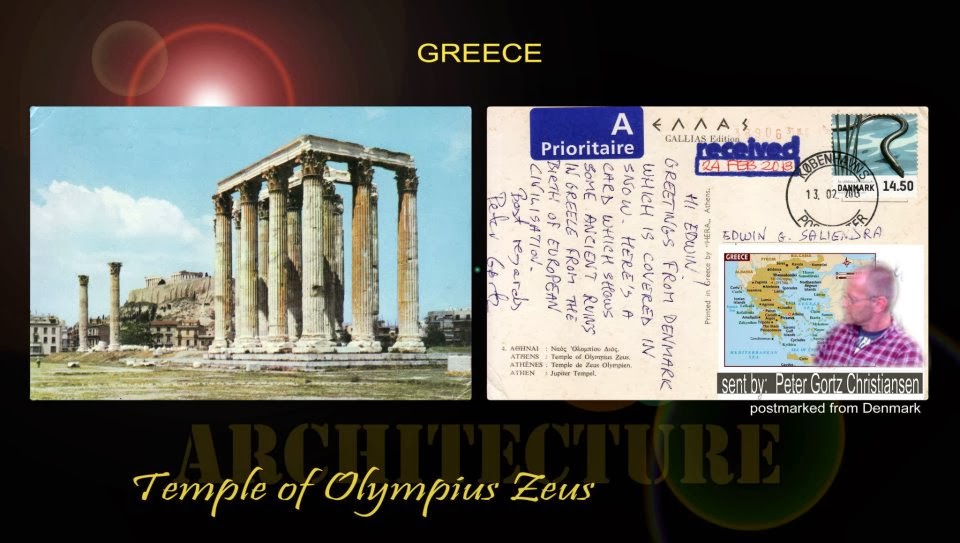 Located roughly one-half mile from the main concentration of buildings at Delphi,  Athena Pronaia was the gateway to Delphi.  The shrine was built and dedicated to the Goddess Athena, whose duty is to protect the sacred precinct of her half-brother Apollo.  Athena's shrine stood near the entrance to Apollo's; hence the epithet 'of the fore-shrine', which is confirmed by inscriptions.

The postcard below shows the Tholos (round stone chamber), probably designed by Theodorus of Phocaea and partly restored in 1938. The algebraic complexity of the structure is matched in detail and perfection by its decoration.  The moldings are delicate; the carving, both in bas-relief and in the round, is masterly.   It is the most beautiful and mysterious building in Delphi.  [READ MORE HERE] 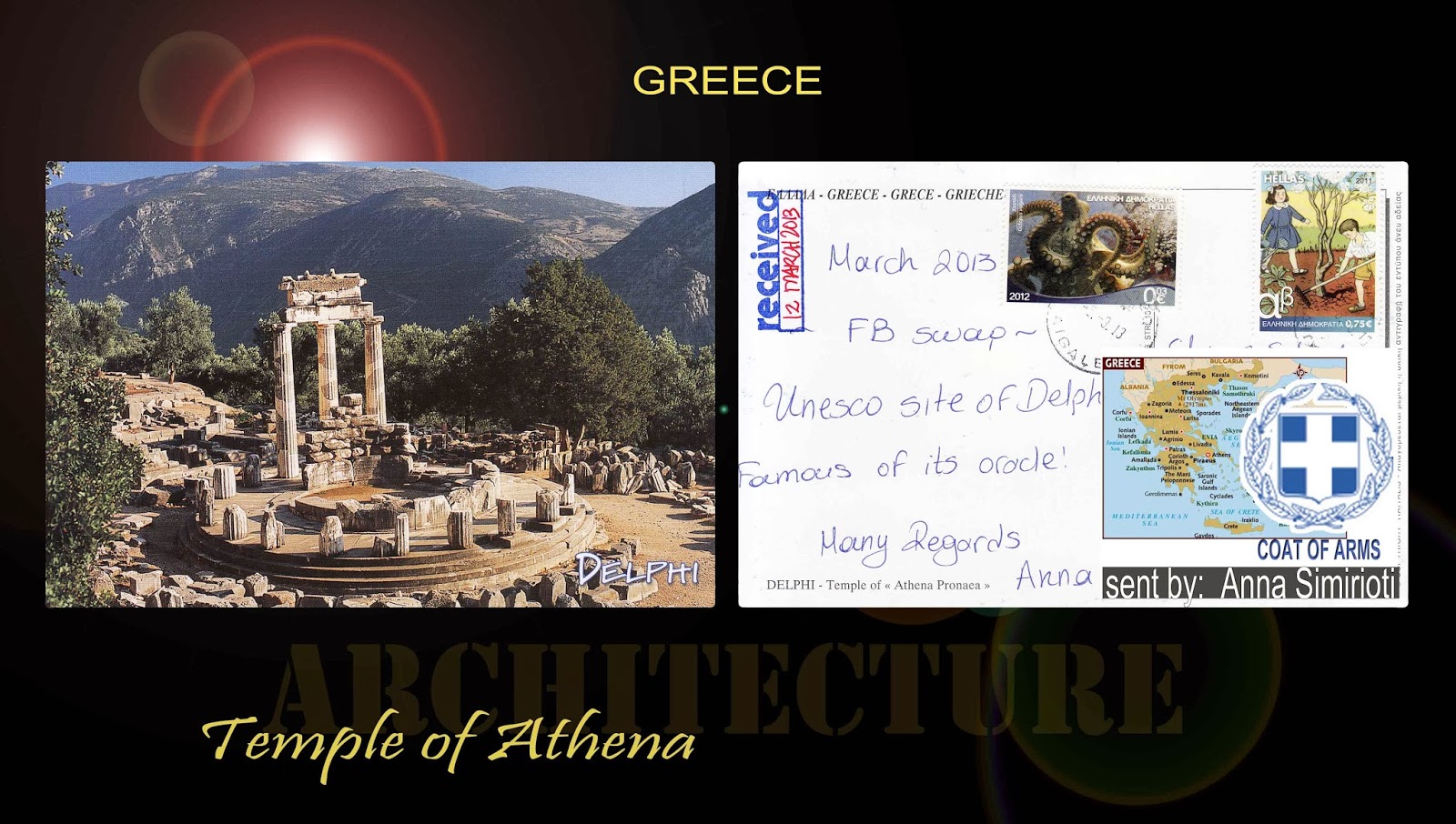 On a hill just outside the site of the ancient city of Segestaa lies an unusually well preserved Doric temple.  It is thought to have been built by an Athenian architect and has six by fourteen columns on a base measuring 21 by 56 meters, on a platform three steps high.  The columns have not been fluted as they normally would have been in a Doric temple.  It also lacks a cella and was never roofed over. The temple is also unusual for being a Hellinic temple in a city not mainly populated by Greeks.  It can also be noted that this temple lacks any painted or scupltured ornamentation, altar and deity dedication/  The temple escaped destructions by the Carthaginians in the late 5th century. -wikipedia 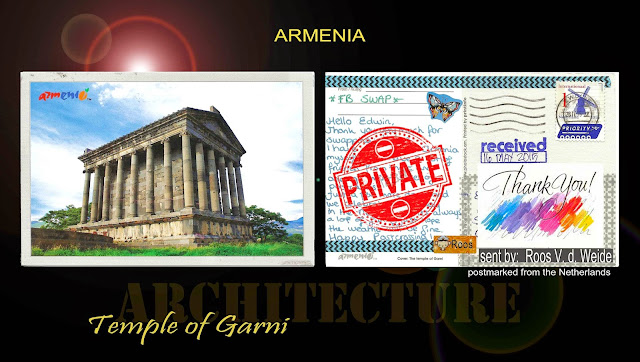 The Temple of Garni is a reconstructed classical Hellenistic temple near Garni, Armenia.  It is the only Greco-Roman colonnaded building in Armenia and the former Soviet Union. It is best-known structure and symbol of pre-Christian Armenia.  After Armenia's conversion to Christianity in the early fourth century, it was converted into a royal summer house.  According to some scholars it was not a temple but a tomb and thus survived the universal destruction of pagan structures.  It collapsed in a 1679 earthquake.  Renewed interest in the 19th century led to its eventual reconstruction between 1969 and 1975. It is one of the main tourist attractions in Armenia and the central shrine of Armenian neopaganism. - wikipedia

The Temple of Hera II (also erroneously called the Temple of Neptune), is a Greek temple in Paestum, Campania, Italy. The name Temple of Neptune is a misnomer from the 18th century, even though it was actually dedicated to the goddess Hera. It is listed as a UNESCO World Heritage site. The Second Temple of Hera contained only Doric style columns which signifies the close bond it has with Earth and by using these columns which were larger and wider pointed to that. It is also perfectly aligned to face a double peaked mountain which the Greeks associated with something of importance as this was not a common happening.


TEMPLE OF POSEIDON AT SOUNIO

The temple of Poseidon in Sounon was constructed in 444–440 BC, over the ruins of a temple dating from the Archaic period. It is perched above the sea at a height of almost 60 metres (200 ft). The design of the temple is a typical hexastyle, i.e., it had a front portico with six columns. Only some columns of the Sounion temple stand today, but when intact it would have closely resembled the contemporary and well-preserved Temple of Hephaestus beneath the Acropolis, which may have been designed by the same architect.
As with all Greek temples, the Poseidon building was rectangular, with a colonnade on all four sides. The total number of original columns was 34: 15 columns still stand today. The columns are of the Doric Order. They were made of locally quarried white marble. They were 6.10 m (20 ft) high, with a diameter of 1 m (3.1 ft) at the base and 79 cm (31 inches) at the top.
Posted by Far From Over at 5:22 AM